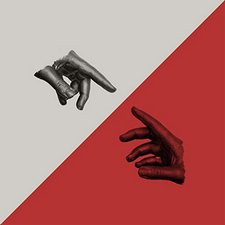 
Anchor & Braille's stylistic output is as eclectic as, well, the rest of Stephen Christian's combined discography. He's one of the lucky few to have found success and relevance through multiple outfits across multiple decades, and it's no mystery as to why. His songwriting never wastes time in going straight to the emotional cores he desires to address, and one of the benefits of his artistic eclecticism is that he can relatably address many of life's inevitable experiences. The latest addition to this comprehensive catalog is Tension, a groovier, more rhythmic record than fans may be used to from Christian, but one that is probably his most inconsequential.

The horn overture that starts out the album promises another exploration of complicated sentiment, but that thought is quickly crushed by the bombast of 80s toms. Christian has always had an affinity for 80s synths and the like, but this time around, those tendencies are supported by point-blank production rather than thoughtful lyricism. "This just feels so, so right/Wide awake in the middle of the night/This ain't no ordinary drug/This is a different kind of love" is the chorus of opener "No Ordinary," and at least it's pretty indicative of every other song's straightforward disposition. There's nothing wrong with generic lines every now and then, but there really isn't any kind of interesting layering happening within these songs.

Sonically, Christian doesn't stray from dark, muddy electronics and dance pop at all. Ironically enough, coming off of 2016's Songs For The Late Night Drive Home, this might be the most consistent progression in Anchor & Braille's history. The primary difference is that Songs took time to explore more tempos, palettes, and topics than the thrill of romantic love. There's hardly a difference in feeling between tracks like "No Ordinary," "Tethered," "Closer & Farther," and "Madness" other than the latter features something of a guitar solo. It's not until closer "Beautiful Song" that we are given a morsel of Christian's trademark depth of heart, and its title is certainly accurate. But it's certainly too little, too late.

As empty as Tension might often feel, it is still functional. Christian is too experienced to forget how to sing well and make peaks and valleys out of song structures. The strong groove presence is enough for fans who just want more Anchor & Braille to be able to casually listen to and potentially enjoy. It's just hard to be satisfied with such an elementary offering from someone as accomplished and reliable as he is.

Admittedly, Anchor & Braille has been kind of hit-and-miss for me. I never really got into the first two albums, but I quite enjoyed Songs for the Late Night Drive Home, so I wasnt sure how I would take to Tension. But the first day that I had it, I ended up listening to it three times, and then two more times the next day - yeah, Im hooked. Its wildly catchy and features terrific pop hooks that dont seem to want to leave my head. While there isnt a bad track to be found, I particularly enjoy the run of tracks from Dangerous to Madness, with Dangerous and Tethered being two of my favorites (the latter is more spiritual than I had anticipated). Tension makes for a surprisingly pleasant listening experience, and I look forward to getting to know it better in the coming months. - Review date: 5/19/20, Scott Fryberger of Jesusfreakhideout.com

Anchor & Braille has been Stephen Christian of Anberlin's more indie, electronic-pop flavored creative outlet for over a decade now. With Tension, Christian follows up the beautiful indie pop outing, Songs for the Late Night Drive Home, with an even poppier, unabashedly love-song driven album in Tension. While it's definitely simpler in its presentation (which just adds to its straight-forward pop vibe), it's undeniably catchy and an enjoyable listen; these songs get stuck in your brain. If you're looking for something lighter to listen to in these tougher times, Tension, ironically, maybe be just the thing. - 5/21/20 John DiBiase

Tension, the fourth release from Anchor & Braille, is aesthetically pleasing and gently uplifting with its darker pop tones. As an artistic statement, it's not quite as compelling as its predecessor, but listeners will still find a lot to enjoy here. The album highlight is "Dangerous," and lighter high notes include "Tethered" and "Beautiful Song." - 5/21/20 Christopher Smith