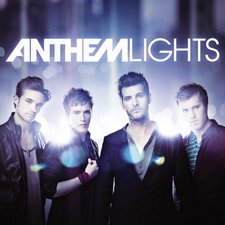 Many fans' first encounter with the Anthem Lights foursome was at 2011's Rock and Worship Roadshow this past winter. While just now coming into the music scene under the current moniker, Alan, Caleb, Chad, and Kyle have been writing and performing together since 2007 (formerly known as Yellow Cavalier). Upon first glance, you might think these guys missed the boy band craze at the turn of the century; despite the formula being somewhat of a relic in the industry today, there is no question that this band is comprised of four, very talented individuals with a heart for worship.

The album opener, and first single, is "Can't Shut up." Like basically every track on the record, this is a praise song. The song's title is echoed throughout the chorus, "This is why we get up and sing (we can't shut up), We got everything that we need (we can't shut up), Love is coming now we are free, We cant shut up about it." Although the lyrics are a little cheesy, a fun atmosphere is created with an upbeat tempo and nice synthesizer implementation. The second song, "I Wanna Know You Like That," is a decent track, but ultimately a forgettable one. The singer expresses his desire to know God and become a man after His heart, complete with plenty of references to David. The next track, "Circles," captures the struggle every Christian faces as they fall again and again, "Before you even know it, I'm right back at the start, Doing what I hate and breaking my own heart, I'm going back and forth and then forth and then back, Round in circles." A true showcase of these four guys' terrific singing ability, this song is one of the band's best.

"Can't Get Over You" slows things down a bit. The stringed instruments and piano on each end of the song are a nice touch to this otherwise ordinary praise piece. "Stranger" suffers in a similar way that the second track did; it is solid but does not tread any new ground. A vocoded line introduces "Outta My Mind," with the band throwing in a few more clever vocal tricks throughout. It is a catchy tune, but the lyrics are not particularly unique. The next track, "Lifeline," is an effectively peculiar song. Musically, it changes directions multiple times. There's a real dance feel to the verses and the chorus sounds like a garden-variety pop song. "Lighthouse" is a standout on the album, with the terrific vocals packing emotion in the chorus. My only complaint is the use of the lifeline" metaphor again. The track by itself is great, but when you just listened to a song whose primary imagery was that of a lifeline, it seems recycled. "Freedom Into Slavery" is another properly executed pop song, but nothing remarkable. However, Anthem Lights saved the best for last with "Where the Light Is." The song is stripped down compared to their other works, with just stringed instruments and a piano providing the music for the majority of the track. Joining inspirational lyrics with perfectly executed vocals and beautiful musicianship, this song fires on all cylinders, "Darkness doesn't stand a chance, So even when your close to midnight, Even when the walls are closing in, There'll always be a star shining, And the night will never win, Where the light is." Even if you don't pick up the entire album, consider heading over to a digital source and picking up this track.

Overall, this album is a modest first release for Anthem Lights. If you play any track at random, it is clear that these guys can carry any song solely with their voices. I can easily see a successful a cappella or acoustic collection coming from this foursome. Some lyrical depth would have been nice, as would more song structure variety. Few compositions venture far from the simple verse-chorus format - a fault to blame more on the genre than the band itself. This pairing of talented young men has potential to become a preeminent player in the world of Christian entertainment, as long as they can keep the music focused on the exceptional talent of the singing and less on sticking to the safe, pop/praise formula.

Earlier this year, Anthem Lights released a pretty good EP as a foretaste of the full-length album to be released later this spring. Well, the time is here and we have that record. What fills the remaining seven slots in this release?

Three of the first four songs are from the EP and all of them are very solid radio-friendly tunes with a strong focus on the Almighty. From this point forward, "Outta My Mind" and "Lighthouse" are the only tracks that I would also classify as good songs. The former is a nice dance party tune while the latter delivers a softer and deeper vibe for the listener. The remaining five tracks fall short for the most part. "Stranger" has a nice industrial pop sound, but seems lacking overall and "Lifeline" gets boringly repetitive. Unfortunately, little positive can be said for the rest of the songs found on the album.

Overall, half of Anthem Lights is pretty good while the other half is pretty weak. It's not a bad start for a band that can have a decent future if they can work out some of the kinks. - Kevin Hoskins, 4/26/11