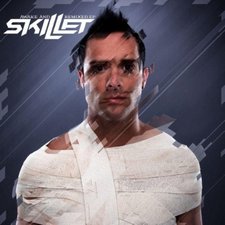 Remix projects are not only acquired tastes, but they're usually pretty hit and miss. Skillet's latest studio album, Awake, has been their most successful release to date, so it's really no surprise that the band should choose to release its first remix project devoted entirely to selections from the album. This EP is a mere four tracks in length, feeling rather short, but manages to clock in at just under 20 minutes.

While Awake has been their biggest record in their fifteen year career, it's also arguably their most lackluster. Somewhat surprisingly, this EP carries a similar feeling along with it. While many might think "techno" when they hear the term "remix," Skillet does go the electronic route on Awake and Remixed EP, but with a decidedly slower in tempo approach. Instead of energizing or breathing new life into some of the album's most memorable songs, these remixes slow them down - sometime way, way down, to the point of nearly stifling the song. The industrial feel of the mixes may bring a smile to the faces of old school Skillet fans, but those looking for a high energy new take on these songs will be left feeling cheated.

While techno remixes can chop up the original song and use repetition on overkill with fast beats and electronic elements, these tracks opt for more of an alternate full song approach instead. "Awake and Alive (The Quickening)" opens the project, driven mostly by piano and echoey vocals from John Cooper and Jen Ledger. The song is slowed down considerably and is a mostly uninteresting re-imagining of the track. It isn't until almost three minutes into the four and a half minute song that it starts to pick up even a little bit. For the most part, "Awake and Alive" remains pretty - and forgive the pun - comatose. But with one minute before the song's finish, a blazing guitar solo surfaces, along with live drums to finally resuscitate the largely lifeless track.

Possibly the original album's most memorable song, "Hero (The Legion of Doom Remix)" is also slowed down but is given a chunky electronic beat intro and industrial elements that give it a hint of an old school Skillet feel. It's a slightly "cooler" (and maybe darker) version of the song, but there's something about it that still seems to lack just enough to keep it from being a really standout remix (but it's still better than the "Awake and Alive" remix). On the other hand, "Don't Wake Me (Pull Remix)" is probably a better version altogether than its original. It still carries an essence of the power ballad that the version on Awake displayed (and that Cooper loves so much), but an electronic beat and ominous synth backdrop give the song a moodier feel to go along with the bittersweet lyrics. When the synths rise for the chorus and an electric guitar riff follows it, the song feels more like the track the original could have been.

"Monster (Unleash The Beast)" closes out the four-track release with a slowed, electronic-heavy take on the fan favorite. Again, the song doesn't really take on much life until just before its finish, and it's unfortunate that a rock song with such energy feels like its claws were clipped. Repetitious vocal bytes from Ledger are interspersed with Cooper's in what is mostly a dreamy refacing of the song. In the end, you're liable to wish you'd just listened to the original than the remix.

Remix projects can be fun and funky or repetitious and annoying, but Skillet's Awake and Remixed EP may be more lifeless and perhaps even a bit more boring than anything else. Fans of the electronic side of the band may enjoy these takes better than their originals, but the band's newfound fan base who loved Awake just the way it is might feel a little cheated. But for the fans just aching for anything remotely new from the band, Awake and Remixed EP should hold them over until the next release of new material. It would have been interesting to see some older Skillet songs given new life or maybe a few more tracks presented here than just four, but Awake and Remixed EP is what it is. Still, if you happen to pass on it, rest assured you won't be missing much.