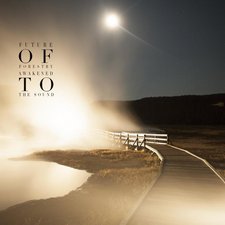 Future of Forestry
Awakened to the Sound


Eric Owyoung has created a unique and tasteful offering in Future of Forestry's latest album, Awakened to the Sound. Awakened to the Sound is my first experience of Future of Forestry, and it is quite the record to expose anyone to Owyoung's work. It is somewhat difficult to pinpoint its genre; perhaps a worshipful string-soaked movie soundtrack would be a good starting point. This album walks this interesting genre line with tact.

The album starts out hitting on all cylinders in "On Giant's Shoulders." This track features sonorous strings and bombastic percussion behind Eric's triumphant chant, "your heart has brought you to this land, you're standing on a giant's shoulders!" This song also includes the first of a few contributions from Indian musician Suhail Yusuf Khan, who sings in his native language and plays the exotic sarangi on a few of the album tracks. The rest of the record is subdued compared to the incredible first track, but no less lovely. Flowing piano arpeggios form the backbone of the serene "Covers You." This track is another highlight, building from a soft pre-chorus to a dramatic rising chorus. Eric uses a flowing string section to create the beautiful complementary sound to the lyrics describing God wrapping us in his arms.

The first half of the album is chock-full of highlights, from the aftermentioned tracks to "Homeward" and "Horses." "Homeward" makes use of a rich sarangi melody and lullaby lyrics which could be seen as being from the perspective of an earthly or heavenly father singing to his child. Perhaps the most cinematic song on Awakened to the Sound is "Horses," which features a running string section blended with subterranean synthesizers and haunting choir vocals. The choir sings this dark line in Latin, "hodie est dies" or "today is the day." The meaning of this song is unclear, but it more than makes up for ambiguity in lyrics with its foreboding texture.

The second half of Awakened to the Sound stands out less than its opening tracks, but it is still expertly crafted. Tracks 7-12 are paced to allow for reflection, with greater instrumental indulgence than the earlier songs. The following tracks flowed together in my mind during my first few trips through the album though not unpleasantly. "Canyons" is one track that sticks out for it chirpy presentation, but it takes a knock for a vague, repetitive chorus of "it's what you gave, it's how you love, oh-oh, oh-oh." While "Life Begins Today" is the poppiest song on the album with another energetic chorus, the rest of the album slows down becomes climactic, cinematic music.

Awakened to the Sound is a well-done album, exquisitely engineered by the famous Bob Katz. It would be album of the year material if the back half matched the front in energy and creativity. Just as a side note for anyone who cares about sound quality, this album is one of the best-produced pieces of music I have heard recently. It has incredible dynamic changes in volume, so be ready for "On Giant's Sholders" to explode out of your speakers or headphones!