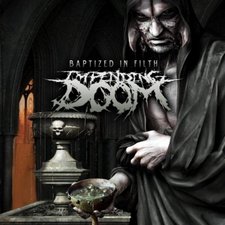 Impending doom has changed over the years. Their first album, Nailed.Dead.Risen was a brutal deathcore album all the way with really harsh and somewhat inaudible lyrics. Serpent Servant toned down the brutality and moved to a straight deathcore sound. There Will Be Violence offered a significant improvement and showed what the band was really capable of. Now we have Baptized In Filth, and in my opinion, it's one of the best metal albums of the year.

Baptized In Filth kicks off with "Murderer," a heavy track that debuted as a single prior to the album release. It's followed by another heavy, fast paced blast-beat filled track, "For The Wicked" which talks about mankind's love for sin and the end times. "Deceiver" is the second song to be made into a music video and offers the same level of intensity featured in the preceding tracks, while talking about a preacher that speaks false words to his congregation; the aggression of the song really projects the message.

"My Light Unseen" can be said to be the most unique track on the album as it features clean vocals delivered by Ryan Clark of Demon Hunter for the better part of its duration. It is also the lone ballad of the album and the first Impending doom track to ever feature clean vocals. "Death. Ascension. Resurrection," the final track on the album, brings Baptized In Filth to a braking, speaker-bursting, ground-shaking end.

The one thing I noticed after I was done listening to Baptized In Filth is that there was no song that I didn't enjoy listening to, the 1-minute-57-seconds-long "Absolute Horror" included. Though I have songs I listen to more than others, the whole album was nothing short of excellent. If you have had a hunger for good deathcore, Impending Doom's Baptized In Filth is sure to satisfy that hunger.