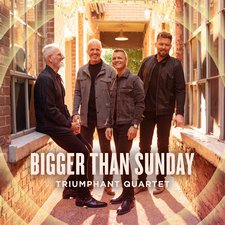 
Southern Gospel veterans Triumphant Quartet have been around in one form or another since 2002. They've taken their big-tent-revival ruckus around the Bible Belt with much success, garnering a few Dove Awards and even a Grammy nomination. They boast a pretty rare combination of modern country-pop and acapella arrangements. Harmonies are the driving force of their umpteenth album, Bigger Than Sunday. Starting off strong with "Best Thing," the group shows off why they've been a staple in this genre for decades. It's a relatively simple song of gratefulness to Jesus, but imbibes a mature sense of "been there, done that" both vocally and spiritually, that sets a tone of confidence for the rest of the album.

My favorite track was the spaghetti-western inspired "He Walked Out," which speaks of the resurrection with musical overtones of awe and boldness, bringing to mind David Phelps' classic, "End of the Beginning," "Hear the empty tomb shout/He walked out/Victor over death/King of righteousness/Hallelujah He walked out." The concept of our relationship with the Lord being "bigger than Sunday" is intriguing and relevant, especially living in the western world where simply going to church is the tell-tale sign of being "religious." While the actual title track is a bit too simplistic to flesh out this idea (its chorus being built out of days of the week didn't help), the album as a whole does a good job of getting the point across, especially "Don't Miss Jesus" and "How Saved I Am."

As a choir director myself, I have a personal love for vocal harmonies and arrangements, and I must say the quartet blends and swells wonderfully. Their age-worn chemistry is clearly present, and you can tell they enjoy singing together. However, I was expecting to hear more fast moving arpeggios or key changes like what you'd find in acapella acts Pentatonix and Home Free, but the arrangements stay on the tamer side, making the songs similar and somewhat predictable. This is most amplified in the album's two full cover songs, Bethel's "Goodness of God" and "Waymaker." These now vastly overdone tracks are just begging for a dynamic lift in the form of a key change or standout vocal moment, but the result is underwhelming. The album closes with a "Triumphant Medley" of many cover songs jammed into a six-minute track, but it doesn't fully satisfy the "medley" moniker. There's nothing connecting one song to the other, and it simply turns into a short version of each song with a pause in between. While perhaps this medley could work in a live setting, it ends the album on a rather incohesive note.

The biggest downfall of Bigger Than Sunday may simply be its intended audience. Seasoned believers who remember the days of the Billy Graham Crusades or Southern Gospel acts like the Gather Vocal Band will likely find joy and encouragement here, but it may be on the cheesy side for modern ears. The lyrics, while thoroughly biblical, are rather surface-level and don't delve much into new topics or content. The strength of the quartet is their tight harmonies and steadfast demeanor. They've walked the walk, and that confidence is infused into every song... I just wish their songwriting chops would have followed suit.