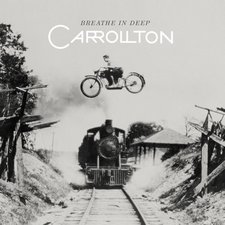 Over the last year and a half or so, the members of Carrollton (formerly Mosteller) have been writing, rehearsing, performing and recording an EP. The result is Breathe in Deep, an impressive six song collection that should get some attention. Produced by award winner Paul Moak (Third Day, Matt Maher) this endeavor was set up for success.

Carrollton came together in 2008 leading worship for churches and youth camps. At one point or another, all four band members have been worship leaders in their respective churches. Although there is a strong vertical worship track ("You are Faithful"), and a more corporate worship anthem ("Death Has Lost Its Way"), this EP is not what you would call a worship album. Instead, it focuses more on life from the believer's perspective.

As far as musical style, Carrollton falls somewhere between Third Day and NEEDTOBREATHE yet is still unique. This is above average southern rock with a hint of southern gospel. Justin Mosteller's vocals are strong and have just enough vibrato to give you that southern feel, while the lead guitar gives a rock edge to multiple tracks. One mark of a good album is when you find yourself singing along after just a few listens; I found this to be the case here. Featuring some nice musical and lyrical hooks, Mosteller and company have paid attention to detail and it shows in the quality of these recordings.

The strong rocking opener "Pass You By" encourages the listener not to "let the beauty of this life pass you by". The next track, "Holding me," slows things down and adds a storytelling lyric that is dramatic but doesn't quite veer into melodrama. It's an encouraging reminder in the midst of adversity, "If you're the one who walked on water, if you're the one who calms the sea, if you're the one who holds the heavens, then I believe you're holding me". "Red" incorporates harmonies and a lyric that would make the Gaither Vocal Band proud, "Take me down to the river and pour your sweet love on my head". There is not a throwaway track here, which is a good thing with only six tracks to sample.

Breathe in Deep is a strong effort from a band that is about to seriously add to the fans who already have them on their radar. The band's namesake, Carrollton, Kentucky, is the band's meeting place between their homes in Louisville and Cincinnati, but the music is somewhere between Georgia and the Carolinas. I strongly recommend Breathe in Deep and look forward to what Carrollton will do with a full length LP in the future.