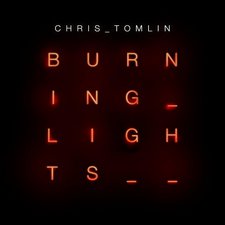 With a decade of work under his belt, Chris Tomlin knows his audience and his craft. If his recorded material doesn't demonstrate that, his many Dove Awards and his recently acquired Grammy Award do, and he's not slowing down anytime soon. But as his career has proceeded, his experimentation has always been in short supply to the detriment of his variety in the long haul, and his most recent effort, 2010's And If Our God Is For Us, was more of the same. 2013, however, shows Tomlin turning a corner in some small ways with his seventh studio album, Burning Lights.

Burning Lights wastes no time in cutting to the appeal with "Awake My Soul," a song of worship arising from the believer's bones reminiscent of Ezekiel 37. The real highlight of the track, however, is Lecrae's delightfully unexpected spoken word appearance (reciting a passage from Ezekiel 37), adding a whole new layer to the track's effectiveness. The already church-popular "Whom Shall I Fear (God of Angel Armies)" and Passion Band's hit "White Flag" follow, but "Lay Me Down" and "God's Great Dance Floor" are the notable surprises here. "Lay Me Down" consists of quick strumming and folk music sensibilities to accompany an anthemic claim to sacrifice, while "God's Great Dance Floor" is Tomlin's attempt at a dance-infused worship cut with lighthearted lyrics to match ("You never stop loving us no matter how far we run/You never give up on us/I feel alive, I come alive, I am alive on God's great dance floor"). While the track is somewhat contrived and definitely out of Tomlin's comfort zone, it's a welcomed detour in the middle of the album, even if it's only for a short while.

In spite of all these moments of greater interest than usual, Tomlin's routine fails to stick its landing, as the latter half of the album isn't nearly as distinctive as the former. "Crown Him (Majesty)" continues in Tomlin's recent trend of revising classic numbers for modern use, tacking on a new chorus to the hymn "Crown Him With Many Crowns." Unlike "Amazing Grace (My Chains Are Gone)" or "Joy to the World (Unspeakable Joy)," which each worked to naturally mix the old and new for across-the-board appeal, "Crown Him (Majesty)" doesn't improve on the original in an invigorating way, turning the triumphant victory march into a somber piano ballad. "Jesus Son of God," "Sovereign," "Countless Wonders" and the closer "Shepherd Boy" serve as stereotypical Tomlin tracks that are easy on the ears but are unchallenging from a congregational standpoint (despite a pleasant guest spot from Christy Nockels on "Jesus Son of God"). In an uncanny fashion, "Thank You God" suffers by its duet with Phil Wickham; the problem is not that Wickham is participating, but that his unique vocal style outshines Tomlin's in personality to create an unbalanced recording. These are the sorts of examples that remind the listener that the old Tomlin hasn't gone anywhere, and that's not necessarily a good thing.

As with many worship albums, the missteps with Burning Lights are rarely in the lyrics but are mostly in the backing musical approach; while the atmosphere of the first half of the record isn't astoundingly different from Tomlin's usual methods, there are refreshing changes that show Tomlin's willingness to venture into uncharted territory on occasion. But it's just that aspect that makes the second half (as well as the entirety) of Burning Lights a flickering disappointment in the end. Tomlin could very well bring about a true surprise in the near future at this rate of improvement. Although this may be the next favorite album of Tomlin fans everywhere, far more daring and accomplished worship albums are sure to come along later in 2013.

Burning Lights comes out swinging like a heavyweight fighter. From the effective instrumental title track, to the recent Passion staple "White Flag," Burning Lights' first six songs stands shoulder to shoulder with Tomlin's best known (and sung) songs. Rapper Lecrae's effective reading of the dry bones passage in Ezekiel chapter 37 is a deft touch at the end of the soaring "Awake My Soul," a song that is sure to be a concert opener in the near future. "Lay Me Down" and "Whom Shall I Fear" are familiar Tomlin fare, but are effective in their own ways. "God's Great Dance Floor" is a bit of a left turn for Tomlin, but despite the somewhat goofy title, it works well as a celebratory song, and makes use of a swinging brass section that adds to the festive feel.

Unfortunately, as is the tendency with many of Tomlin's albums, the second half of the album is largely forgettable and stuffed with filler songs that even repeat melodies and lyrics from past albums. ("Jesus Son Of God" features a similar melody and lyrical bend as Hello Love's "Jesus Messiah".) Stacking this many mid-tempo, slightly re-tread songs at the end of the album blunts the momentum that the first six songs created and continues Tomlin's habit of fading out at the end of an album. A few more creative turns like "God's Great Dance Floor" and some better sequencing of tracks would have made Burning Lights a knock out. - Tincan Caldwell, 1/3/13