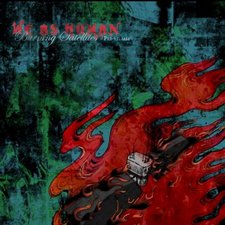 We As Human
Burning Satellites EP

We as Human is still a relatively new band in the Christian music industry, but before their self-titled debut on Atlantic Records, and before touring with Skillet, they were a band with the most brutally honest, unyielding, and unashamed lyrics that I had ever heard. They weren't afraid to do whatever it took to get their point across, even using strong wording in the title track ("You filthy dogs, You sons of men, You will not stand there in the end And rape the word of God To feed your selfish sin"). Although, in its case, the word choice can be overlooked.

The five-track EP kicks off in a dark and face-melting way with "Fly," a track that was penned as a tribute to the Navy Seals, and is an album highlight. The title track takes away the energy and momentum that "Fly" built. The song can't help but feel like a 12 Stones b-side from their debut. The lyrics save the track with the passion for the unsaved. They are a bit harsh and probably won't turn many people towards Christ, so the band could have spent a little more time on them. "Dead Man" is a personal favorite that also gets a lot of fan recognition at their shows. The song talks about how God can kill our sin and pull the dead man out of us. The album takes a darker turn (as if it wasn't already dark enough) with "Broken Inside," a song about abortion and how much the band stands against the topic. "What gives us the right? To end a child's life? All your excuses can't remove the pain That they feel when we decide to take their breath away. So just close your eyes, Pretend they're not alive. All of your lying can't destroy the truth. It's babies that we murder with our right to choose."

"After the Fall" closes the EP on the same note it began, with passion and unyielding lyrics. The song calls out the churches who like to stay within their comfort zones and don't want to reach out to others, in fear of what others think. The brutally honest and unrelenting lyrics may turn off a few listeners who enjoyed We As Human's self-titled album, or even their EP they released a few years ago. The Burning Satellites EP is good and nowhere near a waste of your time, but it's not for everyone.