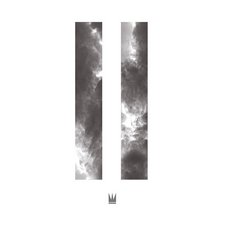 
In case you weren't aware, electronic dance music (or EDM) is here to stay. And as odd as it was that a group like Capital Kings was surfacing in the Christian music industry, they really came around at just the right time. With the combined singing, rapping, and programming talents of Jon White and Cole Walowac, Capital Kings continue close to three years after their debut with II. And it's a great thing they're sticking around.

2013's Capital Kings was a solid debut, though there were definitely some minor setbacks that kept it from becoming great. Some tracks tried too hard to fit the EDM/synth sound into traditional radio pop song structures, as was the case for "You'll Never Be Alone," "Ready for Home" and "Be There." The debut's final track, "The Paradigm," however, really was the showstopper of the set. It was unapologetically EDM in scope and style, featured unmistakable bass drops, and dripped with power from start to finish (the featured guest spot from Soul Glow Activatur didn't hurt, either). With subsequent tracks like "Be a King" (from Remixd) and the lead-in single from last year, "Fireblazin," following a similar feel to "The Paradigm," it seemed that this was the direction that CK needed to move towards with future music, and indeed, II features exactly that.

Though Capital Kings was sometimes inconsistent, II mostly stays the course as it delivers frenetic energy over the twelve tracks here, resulting in a complete EDM experience. With Avicii, Alesso, Calvin Harris, Zedd, Tiesto, deadmau5, and so many others filling up the EDM scene, the boys of Capital Kings hold their own here. These are genuinely fun tracks that often border on infectious, and it's all stemming from the hope of the duo's faith in a non-canned fashion. And this isn't a situation where it's merely "Skrillex with Christian lyrics;" Capital Kings are EDM connoisseurs in their own right, and II more accurately reflects that than their debut. And the best part is, II is a unique album to CK and no one else.

"Forever" is perhaps the album's landmark track as a solid three minutes of EDM greatness. It builds up effectively for a satisfying bass drop. And of course, it's Jesus-centered in every sense ("You take us higher than Everest/give us wings to touch the sky/your love, it leaves us weightless"). "Afterlight," "Upgraded," "Satellites," and "In the Wild" are other especially impressive cuts with beats and synths that'd blend in well on the EDM concert circuit.

Those who enjoyed the more straightforward "You'll Never Be Alone" from Capital Kings will enjoy "Into Your Arms," which is the closest thing here to a "Christian radio song" (which also unfortunately kills the energy brought on by "Forever." Songs like "Believer" and "Live for the Drop" will also resonate with casual listeners of the duo, but there's also a fair dose to hard-hitting synth goodness in the backdrop. For added bonuses, KB has a solid rap outing on "Northern Sky," and as odd as it might seem, Chris Tomlin's vocals fit really well against the worshipful closer "Fireblazin."

Preceded by a serviceable debut, II proves that the duo are here for the long haul and have plenty of muscles to flex. It's a fun ride from beginning to end, and there are marked improvements from previous efforts along the way. There really isn't anyone else who convincingly pulls off this genre in this industry, so while II isn't necessarily the next smash hit on a broad scale (not everyone yearns to "live for the drop," per se), the duo has provided exactly the uniqueness that 2015 needs. As a solid EDM record with a unique sound for this circle, Capital Kings' II is one of this fall's biggest surprises.