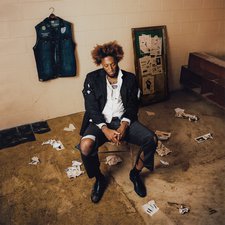 
There is nothing about the aesthetics and art in Lecrae's newest mixtape that even closely resembles something you would find in a church setting. This is a key point that Crae himself gives a nod to by admitting that he is "righteous but rachet." It's this crux that drives the entire narrative that is his attempt to find a balance of reconstruction somewhere at the intersection of the sacred and the secular.

Church Clothes 4 is the final mixtape in a series of four, one made up of 13 songs with features from some heavy hitters ranging from A.I. to Andy Mineo and WHATUPRG. Musically, the album is Lecrae in top form as his beats, ranging from R&B to Trap, sound inventive and engaging. This should come as no surprise for anyone that has followed his career, because Lecrae has always had his eyes and ears tuned to the sounds found on the streets. He has always done well at incorporating enough stylistic differences to keep even the attention of someone who isn't a fan of the CHH genre.

The mixtape opens with a sermon snippet that says "I Have Revival, let me praise my God" as Lecrae pays tribute to those who lost their lives in high profile police brutality cases. Throughout the track, Lecrae boldly calls out the hypocrisy of not only the church but the world of politics as well. It features lyricism that pulls no punches like, "I ain't tryna hate my own kind, but Warnock aint my only choice and Herschel either, I love believers" and "Some of y'all wanna be stars, got some big lights and worship guitars. Y'all play the chords at the end of the message so make sure the melodies tug at your heart." At the end of the song, there is a switch as the beat arrangement becomes more solemn and fades away. The single, "Spread the OPPS," opens with a children's gospel choir singing about the power of God while Lecrae raps about a variety of topics ranging from family and salvation to religion and love. Coming across as a testimonial of redemption, this will probably be one of the tracks with staying power from the mixtape.

"Misconceptions" is the first song to include guest features (Nobigdyl, Jon Keith, and AI the Anomaly), and is also a hard switch into hardcore hip hop. The four delve into the misconceptions that reside in the ebb and flow of religion and true Christianity. The overall theme of the track is one that there is a way that true Christianity should be practiced and there is no place for the "fit-in" conundrum when it comes to the "world" or hypocrites. This is also a song I feel, as the reviewer, should posit with a disclaimer as Jon Keith raps "I hope I get you mad, cause it's better to be p***ed off than p***ed on". For some, this could be a problematic line and one that undoes an otherwise good message of challenge for the church to do the right thing. "Good Lord" is a thematic reprieve that comes next and is one of the musical highlights of the album. Seemingly tailor-made to be the "party song" of the album, with its sax intro, fantastic piano and string chords, the duo weaves a hype track about their good Lord and the women that they have been blessed with.

"Take Me Up," which guests WHATUPRG, shifts thematically into the familiar territory of the dichotomy of God's love and human frailty. Offering a glimpse into their lives and spiritual struggles, Lecrae raps, "If it wasn't for God in my life, I'd be wearing them stripes, I'd be laying underground," while a choral refrain of "Take me up, and we pray every day" is repeated in the background. The Trap beat driven "Protect My Peace" features Jordan L'Oreal and discusses the importance of protecting our peace despite life's challenges, our doubts, and our questions. The riff is quite catchy and the addition of the piano at the close adds to the strength of the song.

"Fear Not" reads like autobiographical poetry as Lecrae admits to sins, fears, and regrets; even name-dropping theologian James White wishing he "flew into Memphis to hang out with soup and tell him that all ain't right." Even with these admissions, Crae finds hope in the promise that "God washed away all my evil" and even if he is "walking through the valley, the Lord's by my side, He heard my cry." The last track on the album bears the controversial wording in the title of "Deconstruction." This song is a perfect closer as it not only serves to close the album, but also the chapter in Lecrae's life. He admits to the things that challenged and hurt him through the past few years, how he felt let down by preachers like Voddie Bauchman, as well as the church. He delves into the complex and painful web he began to weave as a result that culminated in his nearly getting divorced and all but losing his faith. It was in this place that God, like he has for me and you, met Lecrae and lifted him back up. Lecrae declares "My peace has been cemented, my soul has been re-lifted, my deconstruction ended, reconstruction is beginning."

Church Clothes 4 builds and expounds on the themes found in Restoration, and in doing so, solidifies its place among the more important albums released in 2022. In its autobiographical telling of his deconstruction journey that ultimately lead to his reconstruction and strengthening of his faith, this album shines like a beacon for those walking through the valley of the shadow of death. Questions may abound, hypocrites exist, humanity is fallen, but we have a faithful Father who walks with us through these hard times and loves us where we are.