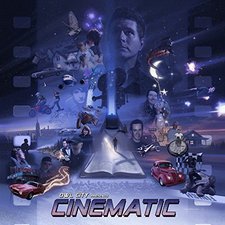 
After taking a break in early 2016 to record 11 conceptual film scores, Adam Young is back to creating music as Owl City with the release of Cinematic. This 18-track project is a natural next step given Young's recent dabbling in composing soundtracks and newfound independence. The bar was set tremendously low for this project when Young released the first single "All My Friends' in 2017, but thankfully the remaining new songs fare much better than the overly-cheesy introduction.

Adam Young has always captivated listeners by tapping into a child-like imagination and dreamy musical landscapes. With the concept of this album being a portrayal or "film" of his life, many songs appropriately take a more straightforward songwriting approach, such as "The 5th of July" which describes the setting of Young's birth, "Montana" which is touches on living / growing up in the mountainous state, and "Not All Heroes Wear Capes" where Young talks about how he looks up to his dad. Unfortunately, the straightforwardness of the lyrics does lose some of the magic that Owl City is known for, and that is only further hindered by predictable pop structures throughout the album. That said, the sentiment of the messages are always nice--and as a dad with a 2-year-old son myself, "Not All Heroes Wear Capes" does strike an emotional chord.

Like much of Owl City's discography, most songs here are pleasant to listen to--"Fiji Water," "Lucid Dream," and "Firebird," are a few songs worth highlighting--but it's "House Wren" that truly stands out as a track that displays Young's strengths as a composer and songwriter. The whistling, birds chirping, and strong lyrical imagery hearken back to Ocean Eyes and All Things Bright And Beautiful and is sure to please old and new fans alike. There are many musical throwbacks to old school Owl City, but also has some theatrical instrumentation to fit the theme of the record.

Many tracks start and end without leaving a lasting impression, but nonetheless put you in a good mood due to the cheerful synth pop soundscapes and optimistic lyrics. The content mostly revolves around Young's life stories and being true to yourself. As always, there is some spiritual content that is nice to see, especially given the reach he has among a mainstream audience. The title-track is a conglomerate of movie-related words and phrases and, although it's pretty cheesy, it serves as a decent end to the 15 original songs. The album actually ends with three unnecessary alternative versions of "All My Friends," "Montana," and "Firebird." The reason for redoing these three tracks will likely be elusive to the casual listener and would have been better served as part of a deluxe edition or separate EP.

Cinematic is a decent release from Owl City that is significantly set back by "All My Friends," three alternative version tracks, and an album length that over-extends its welcome. It's more cohesive than the mosh-posh of sonic experimentation found on Mobile Orchestra and, to his credit, it does feel like exactly what he wanted to put out at this stage of his life. If you are an Owl City fan, this album is worth checking out--otherwise you should at least give a listen to "House Wren."

Owl City is back with his first full album since 2015s Mobile Orchestra and with it we get a schizophrenic album titled Cinematic that feels just a little too pieced together. When Owl City is in top form, he combines an insomniacs whimsy to produce catchy electro pop melodies with slightly left-of-center topics. However, when he misses, he misses with over-simplified lyricism and over-produced pop sounds.

Unfortunately, there are equal parts of both on Cinematic, which delivers an uneven experience for the listener. For every excellent song like Fiji Water, Montana, Lucid Dream, Cloud Nine, and Always, there are songs like All My Friends, Not All Heroes Wear Capes, Be Brave, and New York City that either fall into clichés, or bland pop formulas. I really wanted to like this album, but I found myself struggling to make it through the whole thing in one sitting.

With five full-length albums out in a nine-year span, and multiple song placements in movie soundtracks, I may just have fatigue on his sound. In my opinion, Mr. Young would have been belter served trimming the track list to the best ten, or staying with three to four EPs to get out the whole story he was wanting to tell. Owl City seems to excel in smaller, more whimsical doses, so with the mixed bag of Cinematic, this reviewer will be cherry picking a few songs in favor of the entire album. - 6/5/18, Josh Balogh of Jesusfreakhideout.com