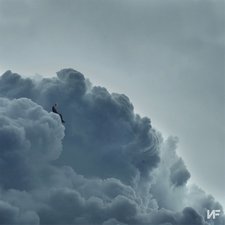 
After nearly two years since full-length album number four, The Search, rapper NF returns with a mixtape of nine new tracks and previously dropped song Paid My Dues. The pre-release singles, Clouds and Lost, were accompanied by his typically evocative videos, causing some to question how much of a traditional mixtape Clouds would be. Was it simply marketing semantics, or was this just a hard-working artist swimming in songs, eager to give fans something to enjoy as they anticipate the next full-length?

According to Nate himself, it's the latter as he addresses this question head-on within the first minute of the opener and title track "Clouds," stating, "Calmly, feel myself evolving/Appalling, so much I'm not divulging/Been stalling, I think I hear applauding/they're calling, mixtapes arent my thing/but its been awfully exhausting/hanging into songs this long is daunting. In fact, if Clouds has a loose thesis, it could easily be NF addressing the sharp assessment of critics, by providing a sampler platter of what he can do.

For those who call for him to tell more stories, theres the tensely cinematic Story that covers a fictional tale (presumably) of being caught in a gas station robbery. The video is a must-see and truly chilling. Want radio ready? Well, then the Twenty One Pilots Trench-era hip-pop-like "Just Like You" is the tune to check out. Think he's too much of a one-trick pony when it comes to flow? Let me draw your attention to "Layers" that changes cadence and flow no less than four times within the same song. It's a mixtape highlight that vies for this reviewers overall favorite. Want solid collaborations? Look no further than what I believe to be career highlights, Lost with Hopsin, which addresses fans similarly affected by mental illness struggles, and Tech n9ne on the blisteringly breakneck track Trust. Seriously, if you have trouble reading along with the lyrics due to the rapid-spitfire then you know a rapper is cooking. Looking for hope in Christ among the lyrics sometimes drowning in the polar ends of bleakness and not-so-humble-brags? Drifting and the previously mentioned "Lost" fit the bill, with the former sharing vulnerable sentiments like, Ignorant to my ignorance/Tell me I'm worth it, God/Give me the faith to rise and help me diversify. Its this nakedly open plea to God that contains the hope that I would love to keep seeing scattered among his forthcoming tracks and would address the biggest criticism I have had of his work since his debut, Mansions.

Need a little smarmy confidence and a potentially clever double meaning? Well, NF can bring the former with the best of them, but Thats A Joke could contain the latter as well, with him seemingly calling hip-hop listeners out for not choosing him as tops in the game and then essentially saying "just kidding." I'll let you decide for yourself, but heres the line for your consideration, Me, I keep it honorable/Who's your favorite? Let me know/Tally up, count the votes/Wasn't me? That's a joke. Yeah, that's a joke. Perhaps this is reaching, giving him credit where it's undue, but I wouldnt put it past him. Notably, most rappers run far past the line of braggadocios and swagger, and while NF can certainly match this common trope, on Clouds, he seems to be trying to reign in his worst impulses to demand respect. Most often he seems to recognize when he's crossed a line or is acting out of insecurity. That's not to say he doesn't still fall victim to the temptation, but it's refreshing to see him veer away into other topics.

Ending with Paid My Dues gives the song a bit more context, and Im glad for its inclusion with these previously unreleased songs. I imagine its difficult for your hard work to be criticized or trashed unfairly, and this tune seems to be the bow on a tidy little package of shooting down the objections of critics and doubters. NF, like many before him, exists in the "middle space" of artists too "Christian" for the world, and too "Worldly" for many Christians. It's for this reason he may never achieve the withholding praise of the mainstream rap community, but I certainly hope it doesn't cause him to pander either way. He's bringing heat just being himself, though it is fun to watch him stretch his talent here on this concise mixtape.

Most of the nitpicks of NF, in general, are answered pretty resoundingly here, but if I were to offer one further suggestion, it would be to diversify the style of the production by utilizing other producers in addition to longtime collaborator Tommee Profitt. The oft sweeping, brooding backtracks can leave this listener emotionally exhausted as each song has a closing track feel. Varying the tempo, the instruments, and the flow would allow for more peaks and valleys rather than everything having a heightened feel to it. Then again, maybe I'm in the minority and this is exactly what fans have come to expect and cannot get enough of.

Overall, this is a strong addition to the NF canon, a succinct statement, and a tasty fan-service snack to hold us over until full-length album number five. On his next release, I fully expect a deeply fleshing-out of the diverse flows, singing, and story-based songs and would not at all be surprised to hear that record five is a concept album. I for one am hopeful that he follows this mixtape with a similarly brief and well-sequenced tracklist aiming for a less-is-more approach that takes listeners on a journey. Ultimately, Clouds (The Mixtape) is a-must for fans of NF, and those looking for excellent beats, rhyme scheme, collaborations, and arresting cinematic production.

Its been almost 18 months since NF released The Search, a brutal and exhausting journey into the mind of Nathan Feuerstein, four wildly popular albums in but still seemingly always on the search for peace and stability. That much time between releases can be an eternity in rap years, and in the opening title track of his new mixtape Clouds, NF freely acknowledges that its been awfully exhausting / Hanging onto songs this long is daunting, leading him to jump the traditional album cycle and release this mixtape even though mixtapes arent my thing. What is NFs thing? Bold and darkly theatrical production, incredible machine-gun vocal technique, and disarmingly honest lyrics, and whatever might define it as a mixtape, Clouds is a showcase for all of the above.

It was frequently very difficult to listen to The Search, a 72-minute album of suffocating catharsis that at times came uncomfortably close to sounding like a suicide note. Thankfully, NF appears to be moving toward a better headspace (now married and expecting his first son) but lyrical content aside, Clouds is a superior listen for two reasons: first, it is only ten songs, and the bleak monotony of the production has really been a weight on the back half of the last three NF albums. Forget the fact that this album actually has a higher list price than an album with twice the tracks, because this isnt a value question; The Search was riddled with excess, and Clouds is much more streamlined to its benefit. Second, NF finally is willing to share the stage after two albums with nary a single verse by a guest rapper, and boy does he pick a couple legends here: Hopsin, no stranger to public struggles with mental health, is the perfect foil to NF in Lost, but the collaboration spotlight is completely stolen by the incredible Tech N9ne, who while pushing 50 years old still may be the best vocal technician in the industry. He doesnt just drop in for a few amusing lines; he blows the doors off of Trust with a 96-second explosion of lyricism that I can barely remain seated while listening to.

Clouds isnt perfect; particularly the ill-conceived Story with its lack of a coherent beat and pointless lyrical fantasy of a convenience store robbery victim should have been left on the tape heap. And, the production in all its cinematic splendor still is difficult to distinguish between many of the songs; one would hope to see NF looking for some more diversity in his beats soon. But with its efficient length, slightly relaxed focus on internal darkness, and stellar guest spots, its probably the best NF listen since Mansion-album, mixtape, or otherwise. - Review date: 3/27/21, Evan Dickens of Jesusfreakhideout.com