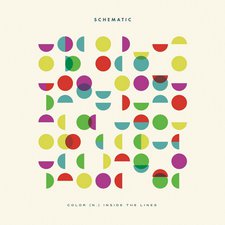 Schematic
Color (n.) Inside The Lines

It's been nearly 3 years since Mae's (e)vening EP released nationally, but former singer Dave Elkins hasn't quit working. Throughout 2012 and 2013 Elkins has been hard at work on Schematic, the name he's using for his new solo material. Elkins began the year with three Mae shows commemorating the ten-year anniversary of their debut, Destination Beautiful, and will now end the year with Schematic's debut, Color (n.) Inside the Lines. Dave brings an overall product that is slightly more experimental, progressive, and moody than Mae, but is still strikingly familiar. Schematic is not being marketed specifically for the Christian audience, but it does, however, offer up some nice tunes for those who choose to listen.

The album opener, "Outside," screams classic Mae. Elkins' voice sounds as good as ever and is welcomed for those of us that miss Mae. The upbeat, overdriven guitars fade for a much softer section shortly past the halfway mark before picking back up at the end. "Senseless Charades" has a nice little groove and features Dave singing along with the lyrical highlight, "It's what you said that keeps getting the best of me; seems I've been fed another one of your preposterous perplexities." Following, is another album favorite, and Mae sound-alike, "Stand." Softer guitars, piano, and effects play throughout a song that would fit nicely on an album like The Everglow. The acoustic trio of "You Are My Southern Girl," "All The Birds Are Singing" and the standout "Hide & Seek," are a nice change of pace and are more reminiscent of the final three Mae EPs. "All-Time Quarterback" is another solid pop/rock song that sets the album up for the interesting-sounding "Rampion Rage." Finally, the beautiful "What it Means" closes the album out with acoustic guitars, piano, and strings.

The record also contains three bonus tracks. The first, "Are You Man Enough?", is a positive love song that starts from a date and moves to a marriage relationship. The lyrics focus on being "man enough" to be a good and faithful husband, as well as becoming a better man during hard times. Elkins sings, "They say tough get going when the going gets tough. Every time you need me I will be man enough," to cement the point. "Stockholder's Meeting" is another rocker with a great sound. Dave sings about people getting in his business and having to deal with those issues. Unfortunately, his language gets a little colorful when he sings, "But I don't give a d*mn about what you're thinking if you're only here to flip us the bird." The final of the bonus tracks is the slow-building "Florescent." While it takes a while for the longer sound to reach full steam, it does feature a nice instrumental section starting at about the 3:57 mark that adds some dissonance to an otherwise slow and straightforward song. Much like Mae, the lyrical content is mostly about life and love, with a strong emphasis on love. While it's not a Christian market release, the lyrical content is safe for anyone, save for the mild language in "Stockholder's Meeting."

Schematic is a solid return for Dave Elkins and Color (n.) Inside the Lines features much of the same indie rock formula that catipulted Mae to their success. Elkins' crowning achievement may always be The Everglow, but he is making great strides to release musical excellence -- and that's where Schematic's debut shines most. Edgier pop/rock, softer acoustic guitar and piano, and subtle electronic effects make the album a joy to listen to. Long track times (the average being just short of five minute) with some musical meandering takes away a bit, but some strategically placed and unpredictable melodies keep you guessing and happier to deal with the more drawn out pieces. Overall, Color (n.) Inside the Lines is a highly enjoyable addition to 2013.