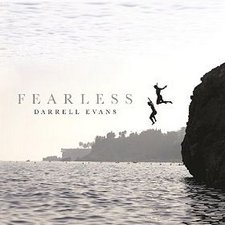 
Before there was a Delirious? or a Sonicflood, before there was a Chris Tomlin or a David Crowder Band, there was Darrell Evans. As many youth group kids in the early-to-mid 90's can attest, Evans helped usher in the modern worship era with such songs as "Trading My Sorrows (Yes Lord)," "Let The River Flow" and "I Lay Me Down." Evans helped pave the way for electric guitars on a Sunday morning, and his songs continue to find their place in the CCLI top songs sung in Churches around the world.

But Evans' latest album, Fearless, is anything but a classic. In an attempt to "modernize" Evans's sound, the album's producers have added a litany of sounds, textures and odd effects that don't mesh at all with Evan's simple and straightforward songwriting. Sounding like a latter-day, warmed-over Bon Jovi album, Fearless sinks under the weight of odd choices and uninspired songs.

The odd choices come fast and furious in the first five seconds of album opener "The Lord's Prayer." A series of robotic blips and bloops is followed by an over-processed vocal from Evans in what sounds like a higher-than-normal key for him. "The Lord's Prayer" is a well-intended mess of an opening salvo, and things struggle to get better on the next track, "Unmistakable," with Evans over-singing against a bombastic score. The title song comes next, with a distorted, garbled vocal and a cartoonish mash of sound. The song improves a bit from there, but not by much. "Yesterday's Gone," "Clean" and "Provider" all float by without much to note, except that "Provider" is the best song on the project, due to its more stripped-down nature.

"Charity" finds Evans going in a more coherent direction, with a song of hope for a stressed out girl named Charity. With an 80's, Phil Collins vibe, "Charity" could have been an interesting song and stylish curveball, but at 2:22 seconds in length, it barely registers before the 80's love song clunker "That's Why" comes along. With lyrics like "won't stop sleeping in the bed we made / Baby, I'm not afraid to stay in this forever," Evans channels the 80's blue-eyed soul of the early MTV era, but the song sounds more like a parody of that era that you might see on a YouTube clip.

And then the album ends with a nearly-exact version (it's two minutes shorter) of "You Could Never Be Praised Enough," a song from Evans's last album that was put out just two years ago on the same record label. With only ten songs on the album, including a duplicate song is a head-scratching decision, but not one that is out of character with the rest of the album.

Veteran artists often go through the "updating their sound" phase, but the stylistic lurch from Evans' last album, Awesome God Is He, to Fearless is evidence that some updates are worth considering for a few more minutes.