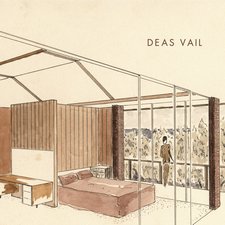 Mono vs Stereo has had quite the history. After signing a slew of artists of a multitude of genres as an imprint of Gotee Records, the label went on hiatus for a couple years before the members of Relient K resurrected the label in 2009. Meant to release both Relient K and other artists' records in the future, MVS moved to sign Deas Vail as their first artist on the label under RK's management, and those who know the quintet's music well weren't surprised in the least. With two impressive indie rock albums in the books, Deas Vail has now released their third album (a self-titled one, at that) and its result is quite a fine one.

Deas Vail is the first album to be produced by Relient K guitarist Matt Hoopes, and while RK influence isn't especially present on the album, the marks of a great musician are more than apparent. Instead of taking the reins of Deas Vail's signature sound and splotching his own artistic choices on top, he gives free-rein to the band to implement their sound just as they want to. However, on first glances, Deas Vail isn't a particularly groundbreaking album; every element of their sound is still here in a mostly unchanged form: the sparse and clean guitar work, the continuous keyboards, and light but quick drumming style. With this background in mind, some could be disappointed by the lack of many changes here, but it still sounds as professional as ever.

Even so, Deas Vail has more going for it musically than initially meets the ear. The band's sound does have a more "airy" vibe this time around, almost sounding more live than recorded, and the lack of heavy production is more advantageous to their sound than otherwise. Sometimes taking its precious time in the moments that make the most impact (especially with the three-minute ambient track "The Meaning of a Word"), the album is meant to be a continuous enjoyment while keeping individuality between tracks. While some efforts of experimentation don't always work all that well (the slower "Towers" and "The Right Mistakes" are more monotonous than interesting), there's enough variety throughout that tracks are easily discernable from others. Wes Blaylock's vocals, high and falsetto like always, are back in great form, and the background vocals of his wife Laura, akin to Birds & Cages's "The Things You Were," have never sounded better.

Lyrically speaking, love is the overarching theme throughout Deas Vail's third effort with both positive and negative connotations. Poeticism has always been the rule of thumb with Blaylock's songwriting, but when it comes to the topic of love, he hits on the head in routine fashion. The singles "Sixteen" and "Summer Forgets Me" already set the precedent months ago, with startlingly realistic implications of relationships ("I know your face in millions of different ways/There's no escape from the memories of warmer days/one's I won't erase.../Blind from the flash, I'm frozen in time/Everything was perfect, everything was right/Now I'm lost in this world, all the colors seem wrong"). The acoustic "Common Sense" continues these trends ("I'm pouring out, you're filling up/I'm senseless doubt and you're scared of love/Just one more dance with you and I'll watch those minutes fly") while the closer "Meeting In Doorways" doesn't make light of a couple's end ("Your leaves are falling dear - our season's over/I will wait for one more year when leaves will fall again"). The stark but abstract style is a winning combination, and it carries the album along nicely and keeps every listen relevant to the listener.

Though their third album isn't quick to show it, Deas Vail has come a long way in their progression. Without stretching themselves too much with innovation, their musical talent and thoughtful lyricism still shine through, a fact that should more than please their legions of fans. It's projects such as these that continue to prove Mono vs Stereo's wisdom in signing the quintet; all of this to say, Deas Vail is yet another triumphant indie rock venture this fall that deserves every praise it receives.

Deas Vail's Birds & Cages was one of the finest indie rock/alternative projects of 2009 and was arguably one of the top albums of the year. With lovely, intricate pop rock tunes and several ambitious alternative epics, the band appeared to leave everything they had on the table in their sophomore album. Two years later, the band returns with high expectations in their second release on the rejuvenated Mono vs. Stereo label. The first two songs to be released from the self-titled album, "Summer Forgets Me" and "Sixteen," are terrific indie pop tunes that are infectious but are both far from radio pop. However, the rest of the more spirited songs on the album seem to lack Deas Vail's Midas touch which provided ordinary indie pop tunes with staying power. Another component that is missing from the self-titled work is the daring alternative tracks like "Cages," "Birds," "The Leaper," and "Atlantis." The key elements seem to all be here, but it feels like the group didn't want to take that many risks this time around. In the end, the album feels less haunting because of it.

In spite of this, the album still does have highlights. A nice string of songs starts with "Pulling Down The Sun," continues with "Bad Dreams," and finishes with "Wake Up And Sleep." But, although the acoustic "Common Sense" is a smart departure from the band's traditional sound, it feels strangely out of place. The risk taken on "Meaning Of The Word" might have paid off better if the track had more distinct vocals and additional lyrics. And while Birds & Cages would have ended epically with any of its three final tracks, "Meetings In Doorways" seems like a safer but less fulfilling ending. Although the album is also written with care, Deas Vail's previous endeavor featured more impactful and spiritually rich lyrics.

If you hadn't figured it out by now, I'm a big fan of Birds & Cages. I think that everything clicked so well for that album that Deas Vail's self-titled sounds more like its predecessor than a successor. Even though I'm not sure this album will be nearly as memorable in a couple of years, their third record will no doubt resonate even more with fans of less determined indie pop/rock and listeners could do a lot worse than this record. - Nathaniel Schexnayder, 10/8/11