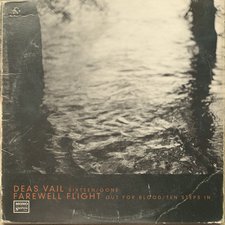 One of the ideas behind a split EP was for two artists to release physical music at a lesser cost to both artists. Of course, in this digital age, it's a little less of a concern when you can simply download it. Another reason to release a split EP is to promote a lesser known artist along with an artist with an established fan base. And since both Deas Vail and newly signed Farewell Flight are a part of Mono vs. Stereo, both bands are a part of their four track promotional split EP.

As both bands have albums releasing later this year, they each have one song on the EP that belongs on their respective albums. For Deas Vail, it's "Sixteen," a flowing indie rock which isn't an overwhelming song for Deas Vail, but it's still solid. The lyrics are that of an optimistic love song. The continuous background vocals in B-side "Gone" are charming, but a bit distracting even though the bridge is really good.

Farewell Flight, a foursome from Harrisburg, Pennsylvania, offers their title track from their upcoming, debut album on Mono vs. Stereo. "Out For Blood" is a clever, quirky, indie pop/rock song with a slight 80's vibe in the chorus. The singer also longs for love over revenge, sex, and drugs, but his idea of love is a "real hot date." But Farewell Flight offers some non-stereotypical, impressive pop/rock on "Ten Steps In."

Although listeners won't be able to extract much in the way of spiritual content out of the split EP, it does showcase some pretty good indie music. Since hearing Farewell Flight for the first time on the EP, I'm certainly interested to listen to their July release. And the EP most likely won't discourage fans of Deas Vail from checking out their self-titled release in September. In other words, the split EP is a good idea that works here.

In order to generate buzz for each of their upcoming albums, Deas Vail and Farewell Flight have joined forces and put out this short, 4-track EP. Each band contributes one song from their next feature length project, as well as one track that can only be found on this digital EP. The veterans, Deas Vail, continue to put out catchy piano rock with relative ease. "Sixteen" is a great first single with solid performances across the board, resulting in a very radio-friendly sound. "Gone" is a slightly more subdued song, with Wes Blaylock singing a lot softer and more airy for most of the track. Farewell Flight, whose first album with Mono vs Stereo hits stores in July, makes a decent first impression. "Out For Blood" is good musically, but may raise some eyebrows lyrically. "Ten Steps In" is the better of the two songs and proves these guys are not going to give us ten songs that sound exactly the same. Normally, I would never suggest purchasing an entire EP for only two unique songs, but considering digital retailers have this one priced at $1.49, it just might be worth checking out. - Jerold Wallace, 6/7/11