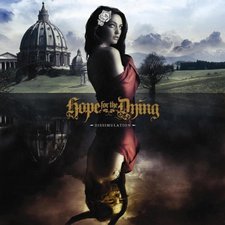 Hope For The Dying
Dissimulation

EPIC. It's a word that I find extremely overused in today's vernacular, but it's the only word I can come up with to describe Hope For The Dying's new album Dissimulation. The group, who have already been through more drummers (and bassists) than Spinal Tap, released their self-titled debut independently, but it was quickly picked up and re-released by Facedown Records' sister label, Strike First. The band has already graduated up to Facedown for the follow-up. Hope For The Dying draws their inspiration, and sound, from classic bands like Iron Maiden and Queensryche as well as modern groups such as Unearth and All That Remains.

The music these talented musicians make is a mixed bag. It's technical, it's orchestral it's metal. The beginning of the intro sounds like it was written by Danny Elfman for a new Batman film, but 1:41 into the track, the guitars kick in. Sweeping guitar arpeggios start to take center-stage and the track moves perfectly into the next song, "Vacillation," which features extremely fast picked and technical guitar work. The track is a nice mix of screamed and clean vocals and really shows off everything that is good about the album. It fades back into the orchestral approach before building back into the next track. The entire album flows perfectly from beginning to end. Perfect and seamless transitions are made track after track to make the project seem as one, instead of eleven separate tracks.

The Queensryche feel, as well as sounds similar to E.S. Posthumus, are found on the fourth song, "Transcend." If you are familiar with E.S. Posthumus you will understand how big the orchestra and drums sound at the beginning of the track are before the guitars and screams kick in. About 4:25 into the song, it takes an unexpected turn; the song takes on the sounds that almost make you think of Carlos Santana with the music and guitar solo. "Imminent War" opens with some nice acoustic guitars before transitioning into a metal barrage, while "Perpetual Ruin" brings back the big E.S. Posthumus sound.

The next three tracks are a part of the same piece: "The Awakening," "The Awakening: Dissimulation," "The Awakening: The Veil Lifted." Each song brings a little something different to the mix. Soft piano and strings open the series, female vocals and the Santana sound return for the second, and the Queensryche feel returns for the close. Serious blast beats and metal mayhem ensues on "Vile Reflections." The album closes with "Derision," a track that has a soft piano intro, orchestral-metal-laden with blast beats in the middle, and a completely soft and orchestral finish.

The album also contains highly spiritual lyrics throughout. The lyrics are Christ-centered and remain that way throughout all of the screams and clean vocal sections for the entire album. One of the best lines from the album is found on "Perpetual Ruin." The lyrics take on an biblical feel as Josh Ditto screams out "Verily, verily I say unto thee"

The detractors from the album are pretty minor in the grand scheme of things. At times, the technical guitar work seems a bit repetitive. Although the songs don't sound that similar in general, the guitar work can be. The other knock on the album is there are a few unnecessarily long tracks; "Transcend," "The Awakening," and "Derision" all exceed the seven minute mark.

Dissimulation is one of the best metal albums to come around in a while. Hope For The Dying has enough older sounds to bring back good memories and enough of the new to be relevant. They mix it up with a great orchestral sound and plenty of straight-up metal. This is an excellent album for any metal fan - a must-have.

The epic orchestral intro to Hope For The Dying's debut album Dissimulation is stimulating and builds anxiety, as any good intro track should. I found myself getting pumped up for something akin to Winds of Plague, but when the well-paced sweeping began I knew this was a beast, much more progressive and melodic. Then, a surprise; the second track shifted and kicked up dust very similar to Within the Ruins. The ensuing chaos is a volley of nearly every facet that can be integrated into metal: clean vocal harmonies, lead guitar shredding, even a synth interlude. And that's just in the first track.

This is one of the most diverse metal albums I've heard in a long time. And with talented musicians across the board, a promising album is substantiated. The vocals are reminiscent of War of Ages or Unearth, comfortably mid-ranged, while the constantly harmonized guitars remind us of more technical artists like After the Burial or Veil of Maya. There are even a few quirkier lulls in the energy similar to Between the Buried and Me and Arsonists Get All the Girls. There really is something for everyone in this album. The only issues are the overdone orchestral breaks (which, admittedly, can't really be called filler in a 54 minute album), and the choppy song structure. Otherwise, all members keep things beautifully paced and competent from aggression to trepidation. There's a whole lot happening in Dissimulation, but they pull off everything they attempt. Facedown definitely has another metal titan in potentia. Keep an eye on Hope For The Dying. - Wayne Reimer, 4/18/11