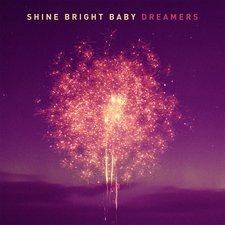 Having been in the scene for several years as an independent act, Shine Bright Baby is set to hit the big time in 2013. Hailing from Orrville, Ohio, Shine Bright Baby joins Citizens, Ghost Ship, and All Things New in 2013 as newcomers to BEC Recordings, and their full-length debut Dreamers is their first batch of new material as a signed band. Known for an engaging live show and a passion for positive-thinking songwriting, Shine Bright Baby is set for a, well, bright future, even if Dreamers doesn't immediately let this truth loose.

In line with the band's name, Shine Bright Baby's main aim is to urge their listeners to live "brighter" lives, and the songwriting here is absolutely indicative of the fact. Even besides obvious examples like song titles "Made to Glow" or "Lumineux," the band wants nothing but to encourage in Jesus' name. "Overcome" is an anthem to tell oneself what is true and shake off nagging doubts ("it's not okay to let the past decide your fate/it's hard to see it in the middle of it/hard to believe when you don't know what's next"), while "Never Too Far" serves as the penultimate ballad which, while simple, provides an earnest call to turn to Jesus in the midst of an off-course life ("you're never too far gone from the arms of grace and the hands that save/it's been a long night, so come inside and rest your weary head"). The issues arise when songs like "Love Restores," "The Difference," and "Beautiful to You" don't feel entirely unique to SBB's concept, almost as if any band could have performed these songs with the same impact. Shine Bright Baby, at least from a lyrical standpoint, fits into the CCM scene without much trouble, but perhaps just a little too well.

Early on in Shine Bright Baby's career, the band carried a pop/punk style, complete with hard-edged guitars, convincingly belted vocals, and a hard-hitting approach that kept things lively; SBB had a great palette to work with coming out of the gate, and while it would have been foolish to follow this formula to a tee with their first album as a signed band, seeing how bands like Paramore drilled this concept down years ago, getting completely away from their signature sound wasn't necessarily a preferable alternative. With neither the pop tracks nor the rock songs sounding good on their own or together, it's hard to get around the fact that, given the band's past precedent, Dreamers doesn't represent the band performing at their highest caliber. This is precisely where Dreamers becomes a perplexing listen: it reveals a band that doesn't quite know what it wants to be. "Beautiful Love," "The Difference," and "Lumineux" are honest-to-goodness pop songs with glittery sparkle (even with autotuned vocals that Emily Irene's voice is way too good for). In the next moment, however, tracks like "The Brave Ones" (complete with a brief guest spot from Disciple's Kevin Young) and "Overcome" take on an unmistakably grittier edge and clash with the rest of the record, giving the entire product an unbalanced vibe that wanders from song to song without much of a plan. Even lyrically, there's a tension here between majoring on uniqueness and playing to radio standards ("Lumineux" is a good example; it uses an agreeably unusual word to drive the song, but rhyming "lumineux" with "woah-oh-oh" doesn't work terribly well). At the end, the album is left as a polished, but unorganized, creation.

As the line "the dream is what keeps you alive" leads the album to a close, listeners can only hope that Shine Bright Baby will apply this same philosophy to their musical progression in the future. As talented and good-intentioned as Dreamers is, the band massively undersells themselves with their flickering musical identity still in its foundational stages. To avoid becoming a faceless pop act pigeon-holed in the radio-centric market, Shine Bright Baby should be true to themselves as class-act musicians and dream bigger for album number two. Fortunately, they absolutely can; a band this smart can only improve from here.

Shine Bright Baby is BEC Recordings newest artist. Fans of the band's rocking indie record may be surprised to find that their BEC debut, Dreamers, is fueled by more of a pop sound. The opening tracks, "We Were Made to Glow" and "Overcome," are pop-rock tunes that show some of the group's potential, but don't quite feature the edge of their indie material. The record takes an even more unexpected turn from their past sound with the straight-up pop songs "Beautiful Love" and "The Difference." Both tracks feel more made-for-AC-radio than anything, especially the latter, and seem more like teenage pop music; both are pretty big drawbacks for fans looking for their earlier and edgier rock. Most of the remaining songs are pop-rock along the lines of the openers, but there is still a little variation to be heard. The worshipful "Love Restores" shines through more than most, as Emily sings, "His love restores. His words are true. What this world breaks His hands make new. So do not fear, not anymore. He can heal what is broken and torn." The top track, however, has to be the Kevin Young (from Disciple) featured "The Brave Ones." This cut sounds most similar to their older material and features a pretty rocking groove. There is potential here for fans of pop-rock with a heavier leaning on the pop side of things. Sadly, it feels as though another rock band has had their edges polished off, but don't count these Ohio natives out just yet. It will be interesting to see if Shine Bright Baby heads back to their rock roots, or further into their pop present. - Michael Weaver, 7/21/13