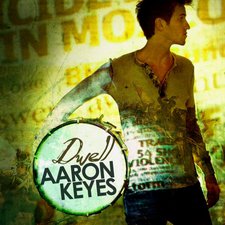 The best way to capitalize on the success of a debut album is undoubtedly a follow-up record, as has been the rule of thumb in the music industry for quite some time. After worship leader Aaron Keyes' Not Guilty Anymore made a splash in the worship circle, a second album was inevitable; but not even a full year later, Kingsway has released Dwell to mixed results.

Dwell's overall sound rests on comfortable ground familiar to most worship albums, but enough stylistic differences are apparent. Keyes incorporates creative percussion and keyboards, but for the most part, they are minimally placed for the best effect. While some songs are more inventive than others, this record is expertly composed instrumentally, a trait too many worship albums cannot boast. "I Am Not the Same" is the best example of Dwell's atmosphere: standard guitars with a dose of synthesizers added in for good measure. "Lavish" is almost entirely a synthpop worship song, which, compared to better accomplished synth worship artists like Danyew and Phil Wickham, pales in comparison, but it's a welcome change from most worship sounds. On one hand, the overall feel of Dwell is hard to call a truly revolutionary sound for the worship genre, but on the other, casting it aside as the same-old would be uninformed.

Keyes has a knack for his trade, as Dwell has some of the more thoughtful worship songs to come around this year. He makes it a point to use scriptural lyrics throughout the album, and these tend to be the most powerful. A perfect example is "Every Knee Will Bow Down," which implements aspects of the famous second chapter of Philippians ("One with the Father/Being in very nature God/You made yourself nothing just like us/Holy and humble/Obedient to death on a bitter cross/Therefore the Father/Has exalted You on high"). Similarly, the title track uses Psalm 91 to hold onto God's promises with certainty ("You have set me securely on high/You've delivered me out of darkness/And when evil surrounds my life/You've commanded your angels to guard me"). Lyrics such as these are especially encouraging, revealing Keyes' heart for worship solely rooted in biblical truth.

The pacing of Dwell is a bit on the slow side most of the way through, and while that's not really a humongous problem by itself, it does show the album's lack of variety. As a result, Keyes' vocals don't ever seem to change much, giving the album a "flat" feel (though all the material presented here is meant for congregational worship, more challenging vocals wouldn't have hurt either). "I Am Not the Same," "Only Just Begun," "Raised Me Up," and "Lavish" all are refreshing breaks from the trend, but on the face, Dwell borders on uninteresting when heard in one sitting. There's value in each individual song, but it all blurs together on one album, and this hurts the replay value in the long run.

Aaron Keyes has a better-focused worship approach since not even a year ago, and Dwell is proof. While it is more adventurous than most other worship albums, it's still hard to call it anything more than an average project, mostly because of its dreary atmosphere. The somewhat astounding fact is that despite its missteps, it's still one of the better worship albums to come out this year, so most fans of the worship genre will want to get their hands on this release.