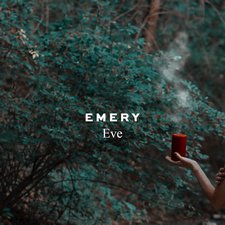 
With their most recent record, You Were Never Alone, Emery released a concept album inspired by biblical stories without most fans noticing, only to divulge that not-so-small detail five months later in Matt Carter's Break It Down podcast. It was a mind-blowing revelation, further elevating what many already considered at least on par with their best works. Emery continually prove themselves as masters of their craft and ones to never make the same album twice, and while there doesn't seem to be any big secret here, their latest effort is still fairly surprising.

Eve is Emery's most mellow album to date. Not only is there little screaming, but the clean production, limited number of breakdowns, and the decrease in darker lyrics also aid in the softer feeling of Eve. It does make the album more accessible, but on a lyrical and emotional level, Eve is as weighty and thought-provoking as ever and possibly their most personal album to date. The magic is all still here with Toby Morrell and Devin Shelton's unparalleled vocal pairing, the genius songwriting of Toby, and plenty of post-hardcore and rock goodness.

The pacing of the album is really quick, with 9 of the 15 tracks clocking in at less than three minutes. Emery wastes no time getting things moving as Toby is singing within the first second of the opening track, "Is This the Real Life." This sets a precedent for the rest of the album of abrupt transitions and decisive musical choices. In addition to trimming any fat, the band also plays around with song structures--the combination of which messes with your brain for how you expect a song to be. For example, the short tracks "Fear Yourself" and "Jesus Wept" musically seem like two parts of the same song while "Streets of Gold" transitions to a different style at the halfway mark (and again a minute later). Their avoidance in adhering to the traditional verse-chorus-verse-chorus-bridge-chorus formula is not necessarily surprising in itself (they've done this on plenty of songs in the past), more so that it is maintained for the majority of the album.

The first five tracks are fantastic, with a lyrical highlight coming from their single, "Safe" -- a song honoring Devin Shelton's mom, who passed away. It's a tear-jerker, and particularly moving at the bridge when Devin and Toby belt out (with Toby's voice cracking), "you played it safe so the ones you loved could have everything / you gave yourself when there was nothing left / even when the sky was falling down you covered me instead." The pop/punk flavored "Young Boy's Dream" appropriately follows as one of the best songs on the album. Conceptually, it's a song about chasing your dreams, which may sound cliche for an Emery song, but Toby inserts enough personal anecdotes to make it compelling and it's set to an insanely catchy rhythm section.

Drummer Dave Powell is especially at the top of his game on later track "Everything That She Offered Me," which has one of the most dynamic and uptempo beats of any Emery song. Other notable moments include the fantastic vocal layering in the opening of "Shame," and the way the steady drum beat and sparse guitar chords work off each other in the verses of "2007 Clarksville High..." The latter song will likely stir up some discussion, with the full title of the song being "2007 Clarksville High Volleyball State Champs Gay is OK." The name of the song came from a joke Toby played on Switchfoot when they toured together in 2007, but the song itself is more serious in nature in that it is about someone who is gay and feeling judged by those around him. Aside from the words "gay is okay" in the title, the song doesn't make any statements affirming or condoning acting out on same-sex attraction, but rather it seems intended to build compassion.

On a more controversial note, the album artwork contains nudity, specifically a woman's bare butt. The story with the artwork is that the band hired a guy to take a photo for the album cover, not providing any direction other than the themes of the album. Once they saw the photograph, they changed their working album title of "lonely gods" to Eve. The intention is obviously to be artistic and not pornographic, but it doesn't mean a similar message of vulnerability couldn't have been communicated in a different way. If you own or are planning to purchase this album but are concerned about the artwork, you can swap it out with the image we at JFH provided on this page (see comments below for instructions).

Eve is an album about relationships, as well as questioning truths as we get older. Emery definitely brings up a lot of questions, and they offer their collective perspective on some, but leave others without answers. It does take some time to really get attached to these songs (especially because so many of them are so short), but there is something to love about each one, and taken as a whole they work really well together. While it might not be one of their most defining moments, Eve is another excellent record from a band that continues to put out important and meaningful albums.