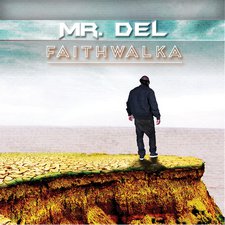 For those who aren't familiar with Mr. Del, he has some of the most solid credentials in the rap industry today. Being a former member of secular rap group Three 6 Mafia, dropping a few of his own albums over the last handful of years, and becoming the self-proclaimed "God's hip hop apostle," he definitely is known as a rap veteran. His latest, Faith Walka, is pointedly internationally diverse to reach a broad scope of listeners.

Early on in the album, you'll certainly hear some diversity with "Da Moneyc," which showcases great production, and "My God," a track that delivers an extremely fast pace and great spitting. Mr. Del takes some chunks out of the 80's and 90's pop music scene with interesting takes on Corey Hart and R.E.M. songs in "Sunglasses" and "Losing My Religion." Both tracks are a most unique spin on the classic tunes and turn out stellar. Not all is so great throughout the listen, however. "Easter Fresh," "Force Field," "Faith Bang," and "Faith Work" each have some of the worst hooks I have heard in a while, both so repetitive that I simply kept wanting to skip the tracks with each listen. "I Believe" comes out disjointed, making it feel like it should have been omitted entirely. Finally, Mr. Del seems to focus on the same positive notes, but there is not much creativity in the actual verses and that can become monotonous at times.

Despite the flaws scattered throughout, things do end on a positive note. "Grateful" and Addicted" carry a nice classic soul-funk chill vibe, and "Die 4 U" brings back some of that great rapping heard in the earlier part of the album. The bottom line: Rap-heads looking for straight-up rap probably won't be all over this release, but if you're into something a little softer and out of the box, this may be exactly what you're looking for.