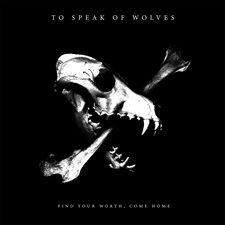 To Speak Of Wolves
Find Your Worth, Come Home

Originating from Greensboro, North Carolina, members from other established bands came together to form To Speak Of Wolves. Signed to Solid State Records, To Speak Of Wolves released their well-received full-length debut, Myself < Letting Go in 2010. Now they're back with their sophomore effort, Find Your Worth, Come Home.

On the surface, this 11-track album comes off as a run of the mill Christian metal album, with screaming vocals and guitar riffs galore. Once you get past that initial layer, there is a raw and genuine feeling that comes across on this disc. An example of this is track two, "Rearview Memories." This song opens with a girl praying to God about saying goodbye to a loved one who has passed away. Later in this track, there is a boy who is praying a similar prayer. This is a personal favorite on the album; the concept of including spoken prayers within the song is great, because it gives the listener a clear intent behind the song. "A Simple Thought That Changed Everything" is another highlight, with the vocalist, who seems to be struggling with doubt in his faith, crying out asking, "Healer, did You hear my call?" and asking Him to "Give him His eyes" so he can be able to see if He is real and a part of him. A nice addition to this song is the gang vocals during the bridge. "Vertigo" opens with one of the most catchy guitar riffs on the album, and again does a great job combining clean and screaming vocals. The album's first single, "Je Suis Fini," is about not conforming to the world and living humbly. It is an aggressive, fast-paced song that does a great job showing off the screaming and singing range of lead singer Gage Speas. The guys from Greensboro definitely don't slow it down one second on here; every song is fast-paced and energetic, with the slowest song being "Rearview Memories."

There aren't many problems with Find Your Worth, Come Home; from start to finish it is heavy metal music done well with emotional, raw, and deep Spiritual meaning. The few problems that did appear involve an overall lack of musical quality. While there are a few songs that displayed excellent musicianship, there were other songs that didn't quite live up to their full potential. I also would have liked to hear a slower song with some cleaner vocals added into the mix.

To Speak Of Wolves' overall sound is interesting; they combine screaming and clean vocals with a heavy alternative musical quality. Fans of Oh, Sleeper, Underoath, and the secular band A Day To Remember will most likely enjoy these guys. This album is definitely not a sophomore slump; from their last album there is an evident sign of maturity as songwriters and as Christians, and we should expect to see big things from them in the future.