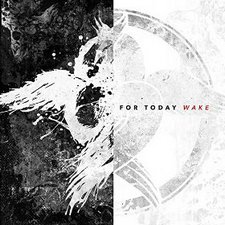 
It seems like almost every album from For Today has some sort of overarching theme, and their newest release, Wake, is no exception. This time it's about the world, and For Today, in typical fashion, comes right out and says what is on their mind. Right from the beginning, with the song "No Truth, No Sacrifice," lead vocalist Mattie Montgomery screams his thoughts of what this world has become. Like their previous release, Fight the Silence, the lyrical content of Wake is very bold and in-your-face. This style may not be for everyone, but you can't deny that it is thought-provoking and can even be eye-opening at times.

Possibly the best representation of this album's theme and sound is "Forced Into Fire." Its hard-hitting riffs and breakdowns really emphasize the power behind the lyrics. For Today also has a couple of tracks on this record that are not what we are typically used to hearing from the metalcore group. For example, the track "Bitter Roots" starts with a haunting guitar melody and guitarist Ryan Leitru's clean vocals. Later in the album, the song "Flooded Earth" starts with a beautiful piano instrumental, and then, at the 1:30 mark, the track hits hard with a brilliant guitar riff. Stylistically, this is one of the best songs on the album.

Upon the first few listens, this record didn't grab my attention as well as their previous two outings did. It was most certainly not because of the lyricism, but rather because of the use of generic breakdowns in a couple of the tracks. However, it has since grown on me and it easily fits right in with the rest of For Today's library. If you are a returning For Today listener wondering whether or not Wake is worth the listen, it most certainly is. If you're new to For Today and are wondering if you should start with this album, you will want to go check out their previous two endeavors first. Wake is a solid album that has easily grown into one of my favorites of the year, but just falls short of perfection.