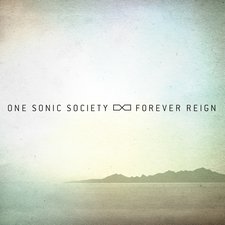 On the heels or releasing three EP's over the last year and a half, all-star worship team One Sonic Society (uber-producer Jason Ingram, Hillsong drummer Paul Mabury and former Delirious? guitarist Stu G) finally deliver their debut album, Forever Reign. With similarities to current worship bestsellers like Elevation Worship and Hillsong United, One Sonic Society nevertheless carve out a space for themselves with an album long on melody, mood and dramatics, but short on memorable individual songs. Forever Reign is more than a collection of EP's thrown together to form an album though. It sustains a worshipful and epic tone throughout its ten tracks, though its best songs are at the top of the batting order, leaving a bit of a vacuum at the end of the album.

"Beautiful Savior" is again selected as the opening track (as with the band's last EP), and the song gives the reflective lyrics an added sense of heft by the clever use of moody synthesizers that are reminiscent of The Killers or The Violet Burning. The following track "Always" one-ups the opening song's theatrics and sense of scope with an anthemic chorus and structure that brings to mind U2's The Joshua Tree (truly the touchstone album for all modern worship music of the last twenty years).

Unfortunately, after the next song, the pleasant radio single title track, the album spends its allowance of memorable songs and settles into a bland groove. In this way, the format of the band's EP's was perhaps the way to go, in that they were short enough to sustain the momentum of songs they contained. Thankfully, ending benediction song "Burn" does close things out well with its plea to the Lord to "write me into Your good story."

In the end, Forever Reign, though it is pleasant and at times soaring, suffers from the fate common to "super group" albums. The collaborative skill of all those involved is usually good enough to deliver a few great songs, but after that, the ones that remain often feel tossed off.

It will be interesting to see what One Sonic Society does in the future. If the songwriters here continue to write under the "Sonic" banner, it's possible that with time they could become a true "band" in every sense of the word.