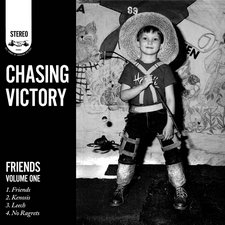 
A lot can change in a decade...but sometimes only something very small might change. In the case of Chasing Victory's long-awaited return, only one letter changed: "r." Their last release was 2007's Fiends, and it's no coincidence that the reunited band's new EP is titled Friends. Quite literally, though, little else has changed -- and that's not a bad thing. The post-hardcore unit's two albums had a southern swagger which invited more comparisons to Envy on the Coast and Glassjaw than Christian counterparts like Underoath and As Cities Burn. It was a refreshing sound back then, and it's still refreshing today.

If anything, Chasing Victory might be less concerned with sounding dark and moody, as the opening track "Friends" pulls off a feat that many heavy bands struggle with: having fun. It's an upbeat romp that emphasizes old-school rock melodies over Adam Harrell's screaming. The third of the four songs here, "Leech," is another joyride, with big gang vocals recalling lostprophets and messy guitars akin to He Is Legend.

Highlight "Kenosis" could have been written right off the heels of Fiends, and it's nice to hear them continuing what they started instead of needlessly reinventing themselves. There's plenty of variety across these four songs, with closer "No Ragrets" exploring space and atmosphere on its verses, and it all works really well. None of it seems out of character from what we remember about the band.

The most exciting thing about this EP is its full title, Friends, Vol. 1. The sixteen minutes pass by quickly, and you'll undoubtedly want more. Hopefully, we aren't far off from receiving Volume 2. And Volume 3. Whatever you've got for us, Chasing Victory, bring it on. It's good to have you back.