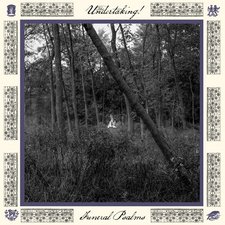 
The past few years have seen some significant growth for the Tooth & Nail / Solid State family. Not only are they releasing some of their best music in years, but theyre growing the roster with a lot of newer and established talent, as well as some indie darlings (like Tigerwine and Lifelong). The Undertaking! is the next to join the ranks, and they come out of the gate swinging hard with Funeral Psalms.

I tend to stay away from pre-release singles until I can hear them for the first time in their proper context (within the album). But I happened to catch the quick teaser for The Undertaking!'s signing announcement and I was floored by the little snippet I heard. So I listened when they dropped "Oh, Negative." I was very impressed with what I thought sounded like the next generation of The Ongoing Concept. Thankfully, the album lives up to the promise of the singles, with fast and furious riffs and a welcomed southern hard rock sound. The band really seems to pull from all over the heavy music spectrum, with glimpses of Maylene and the Sons of Disaster and even some Define the Great Line-era Underoath. The hard-hitting Nostalgia Can Be A Nasty Beast even plays around with some chaos and feedback, a la The Chariot. Some could listen to the album and walk away thinking that The Undertaking! isnt a diverse band, but those who take the time to really dig in will be met with a lot more to take away from it.

Funeral Psalms is quite the appropriate title, drawing heavily from the Psalms themes of grief, despair, and humility, elevating Gods grace above mans depravity. Plague makes it about as clear as can be: If I was God, Id send another plague / we dont deserve what weve got / its a grace I cannot obtain. Vocalist Austin Visser doesnt shy away from his shortcomings, as he continually lowers himself in tracks like Holy Smokes and Demon Season, where he says, I wish I was more spiritual / its not the way my head works / I wish I was less cynical / but thats not how my heart works / I get it now, spent too much time on myself. But hes also not afraid to call out others when fitting. With some mild profanity at the ready, the fiery No Friends takes no prisoners: I am selfish, I am rude / conceited, I am vain / but d*mn it, so are you / dont act like youre not guilty, too. At the center of the whole album, though, is the acknowledging and appreciation for the gift of grace. It has a tough exterior (Pour bleach down my throat / cleanse me from the inside out), but love and grace is the overall center of attention.

I wasnt familiar with The Undertaking! before they signed with Solid State, but with Funeral Psalms, they've definitely earned my attention. Ill surely be spinning this album through 2021 (and beyond), and will eagerly await the chance to see them live.