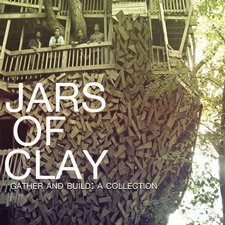 Jars Of Clay
Gather and Build: A Collection

Jars of Clay is at it again. On October 25th, the band released Gather and Build: A Collection, available through NoiseTrade online as a free download. NoiseTrade promotes our well-loved artist with the following statement: "Jars of Clay have been...reinventing their sound for 17 years. Their thoughtful songwriting often wrestles with the complexities of humanity, relationships on an intimate scale as well as a broader look at society and humanitarianism. This playlist features a handful of quintessential Jars songs, as well as a handful of previously unavailable tracks."

Gather and Build is no disappointment to Jars of Clay's reputation; it begins with their own rendition of the classic "This Land is Your Land," as somewhat of a tribute to Jars' legacy in folk music. The rest of the album is mostly a mix of some of Jars of Clay's more memorable songs coming from their last five years of music, including "Closer," "Run In The Night," and "Water Under The Bridge." Coming back to some of these songs serves as a reminder of how diverse Jars of Clay truly is with their style and ability to write good music.

This album also includes some new songs and rarities, with perhaps the most memorable being "Stay." This is a reimagined version of "Forgive Me" from The Long Fall Back To Earth, but with a somewhat 'mysterious' sound to it. Instead of traditional instruments which Jars has been known to use, they continue to experiment with the electronic style in this piece, and rather successfully. "Save My Soul" and "Body and Wine" are the other new tunes, and have more of a spiritual focus, which is something we have always appreciated about Jars of Clay, and are reiterations of their well-developed accoustic-folk sound, with a taste of pop. The album finishes with their 2008 release of "Flood," which was a successful installation of an old classic to a new setting.

Overall, if listeners are looking to score on a new album, this download is not going to be that, because it is essentially a 'Best of' over the last 5 years. But for those new to Jars of Clay, or to those who want a good, solid mix of Jars music to enjoy until their new album comes out, then Gather And Build should be more than satisfactory.

Gather and Build is a unique collection of some of Jars' more popular songs in recent years ("Closer," "We Will Follow," the newer version of "Flood") mixed with band-and-fan favorites you won't hear on the radio ("Oh My God," "Run In The Night," "Water Under The Bridge"). Added into this collection is one brand new unorthodox remix of sorts of "Forgive Me" in "Stay," and then a Long Fall Back To Earth b-side from the ultra deluxe edition ("Save My Soul") and "Body and Wine," which appeared exclusively on Freedom: Artists United For International Justice Mission. It's worth the download just for the rarities, but it also is a really good representation of the heart and art of this incredible band. - 10/27/11, John DiBiase of Jesusfreakhideout.com