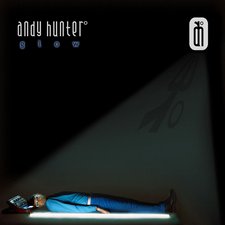 It's been over a year and a half since we last heard new music from acclaimed DJ Andy Hunter. Hunter has received notoriety for his techno and dance concoctions for the past decade, having songs appear in big Hollywood movies and trailers, as well as being asked to DJ major events as well (like a party for Microsoft). Glow is the electronic mastermind's latest effort, and his first independent release.

Glow returns Hunter to form and opens in a much more explosive way than his previous EP, Collide. From the start with "Rise Up," it may sound like Hunter has been influenced a bit by Daft Punk, with fuzzy and choppy synths and a pounding beat. It's the stuff raves thrive on and, sans the "Everybody rise up" vocals, the track feels like it could be part of an action movie soundtrack (similarly to the aforementioned Daft Punk's incredible Tron: Legacy score). However, Glow shifts gears rather quickly with its first real vocal-driven track, "Glow," which features guest vocalist Monique Thomas. The track is driven by a fast beat and Thomas' vocals give the song a soulful club feel. For those hoping the EP will continue with the same unstoppable force that it begins with, the title track is a bit of a letdown, but Hunter is skilled with both electronic dance music and techno offerings, and this track is no different. However, of the quintet of tracks offered here, I'd actually say that "Glow" may be one of the least strong ones. For those who missed Hunter's songs with vocals and full song lyrics on his previous EP, Collide, "Glow" and "Spiral" should be satisfying, and they hearken back to selections from his last full-length album, Colour. Of the two, "Spiral" works the best (and Hunter even created a music video for it just days before the EP's release), featuring an atmospheric dance feel and British vocalist Beth Bullock's soft and silky vocals to drive the song. Bullock's vocals compliment Hunter's music a little better than Thomas'; I'd actually be interested in hearing the two make more music together in the future.

The remainder of the EP--"One Motion" and "Hold On"--are in a similar vein to "Rise Up." "One Motion" is dance party ready with lyrics like "All together, with one motion, move our bodies." Lyrically, that's really all it offers (aside from repeating "Light"), but musically, it's fast and furious. "Hold On" brings the EP out with a bang in a similar fashion, offering simple-but-sweet lyrics, "Hold on / To the One / Hold tight / To the Light" that put the focus on the Savior as the Glow closes.

The techno-dance-techno track positioning may lead certain listeners to skip around a bit, but offering a little bit of everything Hunter can bring to the world of electronic music keeps Glow fresh and lively, not wearing out its welcome before the end. In fact, Hunter leaves listeners wanting more, which is certainly a better place to be in. If fans are looking for another Collide, they probably won't be feeling the two vocal-centric songs much, but the three techno offerings are what make Glow really shine. Hopefully we won't have to wait too long to hear more magnificent musical mixes from Andy Hunter.