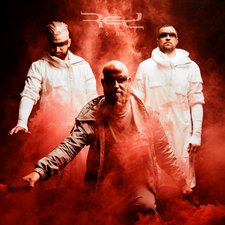 
Over the past decade, Red has developed a reputation as reliable band – the Nashville act has consistently released quality rock music, and, with the exception of 2013’s Release the Panic, struck the target (or close thereto) each time. Coming off of their strongest release since their 2006 debut, I had hoped that their latest offering, Gone, would only improve upon the strengths found on Of Beauty and Rage. While the album is exceptionally listenable, it is also liable to leave listeners frustratingly disappointed. The band has again swapped out many edgier elements for electronic ones, and the catchy and memorable melodies are few and far between this time around. Thankfully, there are a few special gems which hint that Red may not be the “one trick pony” which some critics have alleged.

The album kicks off with “Step Inside, the Violence.” The introduction and melodic premise are indeed intriguing, but soon become lost within what feels like forced heavy-electro elements. It’s hard to say whether the lyrics carry any real meaning, but without explanation, they feel almost as displaced as the rest of the track. “Still Alive” is one of Gone’s better pieces, and it helps fans of the band’s previous works to feel a bit more at home. Its beginning sounds an awful lot like Manafest’s “The Chase,” but it progressively grows darker, with portions reminiscent of a zombie flick soundtrack.

The chaotic strings and melodies in the background of “Losing Control” add a lot of substance to the album’s third song. This is one of the few tracks which boasts a strong flow, melody, and series of screams. The lyrics are alright, but the refrain “and I build it all up / just to watch it fall down” and the screamed “I’m losing control” both come across as vastly more cliché than would be desirable. Title-track “Gone” is a nice addition to the album. The electro-rock subgenre harkens back to Linkin Park, circa 2012, and Red makes it work surprisingly well. The electronic elements are overdone, though, almost as if their computer was left unlocked in the presence of Adam Young.

“Coming Apart” is a solid and enjoyable ballad, but nothing Red hasn’t done before, while the heavier “Fracture” boasts some of the album’s strongest lyrics thus far: “And this is all the pain of breaking fragile truth / and this is pure desire calling out, reaching for You / shattered, need You more than ever / crawling to You, fractured, lifeless, falling into madness.” “Unstoppable” is a shockingly fun track, but the line “I win every single game / I'm so powerful, I don't need batteries to play” is cringeworthy. Regardless, this piece is predestined to land on a few workout routine playlists, and, if the label plays their cards right, various major league sport events (Hey, Skillet and Falling Up pulled this off). “Chasing Your Echo” is a fine offering which reveals that the band has not entirely abandoned its roots.

At this point, the album shifts in tone, choosing to exemplify some of Red’s subtler and softer, more toned-down qualities. “Singularity” is excellent, as is “The Mask Slips Away.” Both tracks have strong melodies, which helps to remedy what has been Gone’s weakest aspect. “Still Alive (Looking for a Reason)” is an interesting beast; it’s an amazing song, yet simultaneously the most radio-friendly track the band has ever released. It is technically a reimagining of “Still Alive,” but the two pieces are hardly comparable. Its honest and hopeful lyrics pack an easily digestible punch, paradoxical as that may seem: “Is this where the story ends, are we just beginning? / Live the lie and we’ll pretend we’re fighting for something / if I lose the world I know, if the night comes for me / I’m still alive, what’s it all for? I’m looking for a reason.” As I’ve mentioned in prior reviews of the band (including on Of Beauty and Rage, which I grossly underrated upon its release), Red has a lot to offer when it comes to vocal breakdowns, and they do not disappoint here. Even if you’re not a fan of hard rock, you very well may find this piece to be a new favorite.

The JSapp remix of “Gone” is a decent addition, at least if you can keep from hearing The Chainsmoker’s “Closer” as its backing track. The redux of “Unstoppable” brings Barnes’ vocals to the forefront in beautiful fashion, although this highlights the aforementioned “batteries” line to an even greater extent. “Coming Apart (Deconstructed)” has the same effect, leading to the pondering of why Red didn’t hone in on these strengths earlier. The other two remixes don’t really add or detract, save for preventing the (deluxe) album from closing on its best note.

Red has never been a particularly versatile band. That’s not a critique; there is an unwritten (and often untrue) rule which stipulates that artists must shift and significantly adapt if they are to be considered “good.” This misleading concept often pushes artists and bands to a point of desperation where they overreach and force an unnatural “development.” Red does what Red does, and they’ve done it well for quite some time. The most refreshing aspect of Gone is how the band experimented with some easily accessible and softer elements. They hit the ball out of the park within that arena (specifically, “Still Alive (Looking for a Reason).” It has been previously hinted at that this may be Red’s last LP, with the band moving to smaller-scale releases in the future. Let us hope that they can muster up at least one more full album, lest we be left with a more-or-less mediocre echo of their unreached potential.

Undeniable commercial success notwithstanding, the last half decade must have been maddeningly frustrating for the members of Red. Even the minutest deviations from the trademark early orchestrally-driven hard rock textures of their first two records have inevitably been greeted with wailing and gnashing of teeth from legions of long-time devotees, while hordes of nay-sayers, on the other hand, have dismissed the band's entire back catalog outright, claiming that all their albums sound virtually the same. Perhaps in a conscious attempt to pander to neither crowd, the band splits the difference between the familiar and the new this time around. Epic, hard-hitting cuts like "Step Inside the Violence" and "Still Alive" should placate fans of the group's earliest works, while the dance-tinged electronic beats that propel songs like "Unstoppable" and the title track offer undeniable proof that the trio isn't afraid to take the musical equivalent of the road less travelled. Most impressive, though, are the ballads and, especially, the remixes, both of which provide solid evidence that, underneath all of the threesome's characteristic heavy metal bluster there beats the heart of a surprisingly savvy pop outfit. Neither the Red collective's strongest work nor their weakest, the new album Gone may just turn out to be their most illuminating. - Review date: 11/9/17, Bert Gangl of Jesusfreakhideout.com