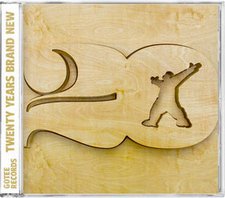 There are few things that do more to make a Christian music fan feel old than when one of his/her favorite record labels puts out a 20th anniversary compilation. But alas, with the twentieth birthday of Gotee Records this year, and plenty of quality music in its discography, it's only fitting for the label to put together a celebratory album. But unlike Tooth & Nail's tenth anniversary box set in 2003, which was a Book of Chronicles-like soundtrack of nearly every T&N family album, Gotee's doing it a little differently, with former and current Gotee and Mono VS Stereo artists covering their own artists' work.

Gotee, refusing to refer to use the "o" word, is calling this compilation Gotee Records: Twenty Years Brand New (of course, they did the same thing in 2004 with Gotee Records: Ten Years Brand New, which was NOT a covers album). There's a lot I could talk about with this compilation, but I feel like I must first start with some of the unexpected (and pleasantly surprising) artist appearances. House of Heroes' presence is only mildly surprising; they recently ended their contract with Gotee and are poised for their first post-Gotee independent EP release in August. But they show up with lead singer Tim Skipper's wife Stephanie Smith (who hasn't released any solo material in four years) and completely own the 4th Avenue Jones song "Stereo." Honestly, they bring this to us as if they wrote the song themselves. Stephanie Smith also shows up with a cover of Relient K's "I Celebrate The Day." It's almost an odd selection, considering it's June and that's a Christmas song, but this is a previous release that fit the perameters of the compilation, so Gotee decided to add it. Former Family Force 5 frontman Soul Glow Activatur does an impressive job with the John Reuben gem "Doin'." The music sounds like a mix of Business Up Front, Party in the Back and Dance or Die, and it's just dreamy. He even throws in a great joke at the beginning. It's an interesting choice to cover a song that features lyrics like "Reuben, what is he dippity doin?" for the hook, but to be fair, it's a valid question, as it's been nearly four years since we've gotten a proper album from the Ohio rapper.

Thankfully, we hear from John Reuben more than once within these twenty songs. Not only does he join Capital Kings for the Grits classic "Ooh Aah" (providing the raps originally done by TobyMac), he also does not one, but two renditions of the Family Force 5 song "Love Addict." The first is the actual cover with synths and a hip hop beat, the second is the "Lounge Club Version," which is rich with organ, keys, and a disco-style guitar and is the more accessible of the two. But of course, regardless of which version you listen to, it's a sure-fire John Reuben track. Another surprise comes from Gotee's flagship artist, Out of Eden, who haven't even been together for about eight years now (and their last actual album came out nine years ago). But they join this compilation with a cover of House of Heroes' wonderful song "Constant," and they do it magnificently. It's done in true Out of Eden styling and gives House of Heroes a run for their money, and gives this compilation another shining moment.

The first bunch of songs in the tracklist are some of the strongest, with Relient K starting things off by covering "Body Be" by johnny Q. public. RK's version loses some of the aggression from the original, but otherwise, they do a great job of keeping the spirit of the song; it sounds like it's from the 90s, but still sounds modern. Capital Kings' take on "Ooh Aah" is pretty solid (a lot more electronic), though the two vocalists do sound like they're trying a little too hard in the raps. It's still a highlight though. Next, The Katinas (who I didn't know were even still around, but apparently they never broke up) cover "River" by Out of Eden; it's definitely fit for radio, but it's also pretty pleasing to the ears, with its turn-of-the-century era r&b/pop flavor. Later on, Grits reunites for a smashing hip hop track that features the chorus from Jennifer Knapp's "Undo Me." The song keeps the title, and may even feature a newly-recorded version of the chorus from Knapp herself (though she doesn't appear to be credited as of yet), but turns out to be a brand new song and not just a cover - which makes it one of two non-cover songs, as the final track is Relient K's "10 Year Reunion" remake of their ever-popular "Sadie Hawkins Dance" (even though the song came out 13 years ago). It's a fun addition to the compilation, but it doesn't actually improve on the original; to be honest, something about it seems forced and uninspired.

The other songs on the tracklist range from "mediocre" to "just okay" on Scott's Official Quality Scale. Jamie Grace's rendition of Relient K's "Getting Into You" was saved by the usage of keys in the verses, but her vocals are still very unappealing; however, it's still an acceptable track, and better than some of the others here. Unfortunately, the same cannot be said for the following track from Ayiesha Woods. Another Jennifer Knapp cover, "Refine Me" features decent, acoustic pop rock instrumentation, but her raspy vocals are a little grating on the ears, as are Sarah Kelly's. Kelly's cover of Jeff Deyo's "Bless The Lord" sounds like a Skillet-ish, piano-infused Cranberries song with 80s rock vocals. To be fair though, she does stay true to the original version. And everything else is very skip-worthy, whether it's Harper Still (Jamie Grace and her sister Morgan) covering Out of Eden's "Here's My Heart," Ryan Stevenson offering a forgettable performance of SONICFLOOd's "My Refuge," or Paul Wright's uninteresting take on Christafari's "Valley of Decision" (then again, you have to really like reggae to like Christafari to begin with).

Gotee Records (and, more recently, sister label Mono VS Stereo) is and has been a staple in Christian rock, rap, and pop for the last twenty years since the release of its first album, Out of Eden's Lovin' the Day. And here's hoping for many more years to come and, hopefully, many more quality releases. Whatever the future holds for the small Nashville labels, it's always nice to reminisce on the past. If you're with me on that (or you've got a thing for cover songs), Gotee Records: Twenty Years Brand New oughta do the trick for you. Even with the misses, you'll find some great tracks here.

If we're being honest, record label anniversary albums are often gimmicks meant to build awareness for new, unknown artists by inviting them to cover bigger names from bygone days. At first glance, that might be said for Gotee's anniversary release. This album is more than that, though, evidenced first of all by the title: 20 Years Brand New. Through its heralded beginning, tumultuous middle, and relatively humble present, and in an industry so wracked by volatility, it really is remarkable that Gotee can celebrate two decades of life. The album boasts a delightful list of alumni appearances, some surprising but inspired song choices ("I Celebrate the Day", for one), and fantastic eclecticism. Here's a good example of what makes this album so much fun: there's a wildly imaginative cover of a Relient K song from 2003's Two Lefts, "Over Thinking," from a band called Zilch. The song wasn't a radio single, the cover is excellent, and one would have to be pretty well-versed in music lore to remember that Zilch was the name of Sonicflood before they were Sonicflood. Most don't even remember that Sonicflood was part of Gotee. The record is uneven, as expected. There are highlights - John Reuben covering Family Force 5, Grits covering Jennifer Knapp - and other covers that remind you of songs you haven't heard in years. The fact that Relient K's two offerings, a cover of "Body Be" and a remake of their own "Sadie Hawkins Dance," fall a bit flat marks another small displacement in the band's shocking downward trajectory. Labels come and go, and vanity labels more than most, so Gotee should be proud of their history. They've been a strong creative force in Christian music, unafraid to explore, break down barriers, and take risks. Maybe it shouldn't be surprising, then, that their anniversary disc is such a clever and fun collection. - Review date: 6/13/14, Mark D. Geil

With really any given compilation of music, there's a good chance not every song will appeal to your specific tastes, and Gotee's 20th anniversary project is no different. It's a fun and unique collection that any fan during the label's 20-year run will find something to love about, with artists spanning two decades covering each other's work. While the cuts from many of the more recent artists arguably fall a bit flat, it's gems like Out of Eden's brilliant cover of House of Heroe's "Constant" (I mean, really, these sisters own it with this rendition) and John Reuben's Family Force 5 cover of "Love Addict," House of Heroes' covering of 4th Ave's "Stereo," or even Soul Glow's take on Reuben's "Doin'," that really give this project serious flair. If you're a fan of anyone on the track list, you should definitely check this one out and join us in celebrating one of the industry's top labels. - 6/15/14, John DiBiase of Jesusfreakhideout.com