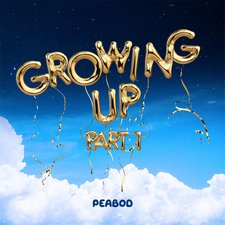 
It's interesting to watch music becoming more episodic, like a serial TV show that releases a new chapter each week. Centricity Music has been regularly releasing new singles for their artists for a while now, from splitting up Jason Gray's Order, Disorder, Reorder album into three EP's, to slowly releasing new music from artists like Jordan Feliz and Apollo LTD that bundles together each new single into an EP with each new track's release. The label's resident happy hip-hop artist PEABOD has spent much of 2020 prepping the first half of a new musical venture, inspired by his personal struggle with bitterness and cynicism, something God has since brought him out of. The first half of his Growing Up project, Growing Up, Part 1 gathers up three singles that debuted separately over the summer and adds two additional tracks for a more complete and rounded thematic experience.

Since July, PEABOD (AKA Isaac Peabody) has been taking listeners on a very personal and deliberate journey. The first single, "Big Feelings," offered a surprisingly darker tone with an edgier beat and mood set. Still, angst isn't really PEABOD's persona, so when his topics turn serious, there's still a feeling of hope when he gets real. Musically, the track has the pop sensibility of something from TobyMac or John Reuben--two artists who have long mixed the more serious and playful in their own signature sounds. While PEABOD's journey and wrestling reminds me a little more of Reuben than McKeehan, there's much more of the kind of hopeful resolution that Toby offers regularly in his songs. Isaac stays open and relatable in his songs, and his honesty makes these songs so easy to return to. Even as you may find yourself nodding in heartfelt agreement with his inner turmoil, like found in the more soulful "Heavenly Father," he always brings the focus right back to his relationship with Christ and the eternal hope he leans on, and it never feels forced or gimmicky. Even after transparent lines like, "This is not the way I thought I would grow / stuck inside a mood from two weeks ago / People acting colder than winter / Got me feeling jaded, thinner / Tried to block it out but it's in my brain and now I get anxious when I pray / Technically I'm older and bigger, but I feel too young to be this bitter," he brings it back around as he prayerfully adds, "God, Your ways are higher than my highs and my lows / Elevate my thoughts to those better than my own." These are truly relatable struggles that many more believers most likely go through than feel comfortable admitting, so there's something therapeutic about hearing PEABOD being so vulnerable, while never accepting and succumbing to the darkness he's battling.

The EP opens with its thesis statement, the fun but reflective "Wonderful and Scary." From its opening soundbytes taken straight from cuts on his label debut, Healthy Snacks, "Wonderful and Scary" is shaped from a heart of pure gratitude, as he acknowledges his humble beginnings and those who've supported him from the start. The song also reflects on the overall pitfalls and blessings of growing up, setting the thematic stage here. In the chorus, Isaac gets the point across clearly, singing, "We grow up, we fall down / It's wonderful and scary / Stepping out of our town, both terrified and daring / Seems live everyday I'm growing up another way / We grow up, we fall down, it's wonderful and scary." The first all-new track, "Love Everybody," featuring guest raps from Tedashii, is an extremely timely track about showing love to our neighbor no matter who they are. As the world seems to be falling apart around us, this is an enjoyable and catchy jam about sucking up our pride and showing Christ's love to those around us, "If I had my way, I'd say love everybody / all the time / a big party / treating others like a brother that's a good hobby / everybody / side to side / one posse / God loves everyone, so go love everybody."

After the previously released highlights, "Big Feelings" and "Heavenly Father," the 18-minute EP concludes with Isaac's first duet with his wife, Belle. "Prodigal" wraps things up nicely, evoking feelings of a hopeful spring morning, thanks to birds chirping and his girl's soulful vocals. In the chorus, she sings "Home / I felt so far from home / But I heard You call me home / When I felt alone / With all the debts I owed / You ran to bring me home." It's a beautiful picture of the prodigal's journey, but PEABOD wraps it all up with a moving verse that is heartfelt and fitting, "Thank God that He runs to us at the moment that we turn back towards Him. Thank God that He builds me up even when I try to build before Him. Lord, I am prone to wander, but You lead me back to water. Thank God Your love is stronger, to You be all praise and honor!" As the song ends with Belle Peabody repeating the chorus, Isaac appropriately repeats part of the chorus of the EP's opener "Wonderful and Scary," "We grow up, we fall down, it's wonderful," leaving the listener on a positive note.

It's been a tough year, no doubt. I don't think I really need to list why, but it has been enough to shake the faith of some of the strongest believers. Thankfully, there are artists like PEABOD who gives listeners music that's enjoyable to listen to while offering hearty, inspiring lyrics to chew on. There's so much relatable about Growing Up, Part 1, and while many of us have seen and heard about fellow believers who have thrown up their hands and called it quits on the Christian walk, this batch of songs gives us reassurance we're not alone in our struggles while earnestly reminding us that His love is stronger, and He will run to us when we look to Him. Don't miss Growing Up, Part 1; I can't wait to hear what Part 2 has to offer.