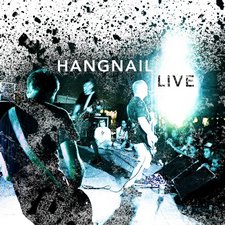 
Hangnail is one of those hidden gems from Tooth & Nail Records' past that, sadly, seemed to have gotten lost in the shuffle. Starting to get into their groove as bands like Anberlin and Emery were coming on the scene proved to be an unfortunate timing for the band, and they just disappeared after 2003's Transparent. But they weren't forgotten; at least Brandon Jones from Indie Vision Music remembers them. Fast forward thirteen years, and Jones has partnered with the band to release a live album that had been held up in legal purgatory. Finally getting permission, Hangnail has allowed Indie Vision Music to release it exclusively through their Bandcamp.

Hangnail's new live album is only new in the sense that it was released recently. It was actually recorded and mastered all the way back in 2002 at a concert in the band's hometown of Kenosha, Wisconsin (which may partially explain the horde of particularly passionate fans you can hear throughout the course of the album). But even now, the quality of the live recording holds up. I'd even say its quality is up there with the Five Iron Frenzy and O.C. Supertones live albums. It's great that we are finally able to have this release in our hands (so to speak...as far as I know there won't be any physical copies).

Live features a whopping track list: eighteen songs (and one intro track) make up this collection, spanning the course of just over an hour. At this point in their career, Hangnail had two albums to its name, both of which were on Tooth & Nail/BEC Recordings. Needless to say, the band had a limited well from which to draw. Ten of the songs included were taken from the album they had just released, Facing Changes, with six taken from their self-titled debut. Lead vocalist Mike Middleton addresses the crowd several times, making mention of a song being "an oldie but a goldy" or saying that they've had demand for a certain song for a long time before finally giving in and playing it. Given the fans' reaction throughout the show, you can tell that people were really getting into their set. The band did offer up one song, "Surrender," from their then forthcoming new album, Transparent, to which the crowd responded positively. But it's clear they were there for the songs they knew and loved.

Something that's become a bit of a staple at rock shows these days is for the band to take a break from the rock in the middle of the set by playing a slower song or ballad - maybe two or three. And I have no problem with this. But one of the things I particularly enjoyed about Hangnail's live album is that that didn't really happen. After the ominous intro track, the band started "Friendly Advice" with a blistering, metal-like guitar riff. This jumpstarted what was to become an energetic, punk rock fest. "Commitment Unbreakable," "Taken For Granted," "65,000 Miles Later," "Carry Me," "Don't Let The Sun Go Down On Your Anger"...the only time Hangnail really seemed to slow down was when they talked to the crowd between songs. I'm sure it made for a fun time, leaving the fans with a severe deficit of energy afterward. And, of course, I appreciated Middleton's short speech about how God has changed his life near the end of the set. He made it clear that God wasn't something that he just talked about because he was "supposed to," but that He is real and made a real difference in his and his bandmates' lives. The set ended with perhaps their most popular tune (and one of my personal favorites), "All That You Wanted."

Hangnail was a truly underappreciated band in Christian punk's heyday. They fit right in with MxPx, Ace Troubleshooter, Fanmail, and more, but they also had the added benefit of generally having more Christ-centered lyrics (not that those bands didn't, but I feel like Hangnail had quite a bit more). Fans who mourn for the golden era of Christian punk and/or miss this wonderful band should go ahead and download Live as soon as you finish reading this. Everyone else should, too. It's free, guys, and it's really good.

Anchor Hymns Be Unto Your Name - EP [Integrity]

Blanca The Heartbreak And The Healing [Curb/Word]

Ben Fuller Who I Am [Provident]

Matt Maher One Heart at a Time - Single [Provident]

Leigh Nash Made for This (Acoustic) - Single [Visionary]