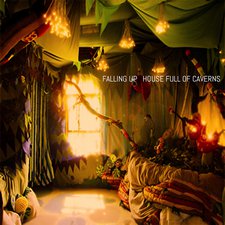 
What do you do with an almost entirely instrumental album? As a self-proclaimed, "lyrics guy," House Full of Caverns by band Falling Up is outside of my comfort zone of a typical review, so I figured I'd go for it. Especially after not being able to pull the trigger on another excellent instrumental album, called Union by Future of Forestry in 2018, I'm long overdue for this challenge. Few lyrics to dissect? No problem!

If you know the now-defunct band's journey from 2004's rap-rock beginning, Crashings, to their triumphant magnum opus, Self-Titled album in 2015, then you know there was a tremendous amount of experimentation and growth in-between. Or perhaps, like me, you missed it at the time. If you, much like myself, wrote off the band strictly on the merit of their first two records specifically, you owe it to yourself to tune into the latter half of their career, spanning 2007-2015. Seriously. You may not connect with all the sound shifts or concepts, but each album and its layers of story and sonics are worth at least a spin or two.

One of the gems of those final sessions for their last album birthed these eight gorgeous ambient tunes which have proven perfect for quiet evenings of reading and writing. House Full of Caverns is a perfect album for lighting a candle and watching the flame dance while soaking in the mesmerizing music through headphones.

The first highlight is opener "Aron on the Wind," with its rolling piano later joined by strings that befit a sprawling movie scene from a Lord of the Rings-type epic. The violin and cello in "Nova" are soothing and yet somewhat melancholy simultaneously. The build into the second half of the song bears a passing semblance to what instrumental rock band Explosions in the Sky furnished for the Friday Night Lights TV show soundtrack. In addition, the pairing of electronic elements with the violin near the end is particularly satisfying. "Fenn" utilizes rolling percussion for a big sound as the violin meanders alongside a mournful ambient guitar lick and haunting vocals buried deep in the mix. "Violet" takes its time (as much of the songs do) reaching its rousing conclusion, but it's worth the time investment.

Lastly, closer "Fathoms" gives us the only lyrical statement of the entire set, and the piano takes the lead, coupled with Jessy's heartfelt vocals bringing the forty-five minute journey to a tender end. I'll leave you with the lyrics and one last exhortation to make the time for this underrated band and a well-deserving EP in House Full of Caverns. My genuine hope is that this album could kickstart a love for a band you may have missed, or rekindle the desire to return to their deeper catalogue. Either way, I hope you enjoy your experience should you be inspired to give the album a try.

"I'll be a while,/Because I need to see the sunrise/Ten thousand skies above me/They've come to save me from the twilight/From darkened moon/So it circles down golden fire falls/And there I wait/Never fall asleep for a moment/And all the world turns over/Then you walk beneath the treetops/And glowing beams/And I noticed that you were walking there/And I called out your name."