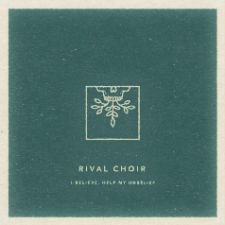 
A band reboot is a rare and interesting thing. It's a risky move to change your name and essentially start over as a new entity in the middle of your career, which is why most bands elect to soldier on in their original form even if their sound has dramatically changed or they would much prefer a fresh rebrand (I'm looking at you, The Devil Wears Prada). But Mouth of the South is clearly not most bands, which is why they have started afresh under a new banner: Rival Choir. And with a new name comes a new album: I Believe, Help My Unbelief.

Since Rival Choir is for all intents and purposes a new band, even if many of the members are the same, I don't want to spend much time belaboring any similarities or differences that they may share with their former state as Mouth of the South. Suffice it to say that Rival Choir is a bit more upbeat, a bit more melodic, and a bit less grindcore-ish than Mouth of the South was. With that being said, this review will treat this album as a debut album from a new band, because that's what it is.

To begin with, this is a dense and heavy album; there's a lot of substance, both musical and lyrical, packed into some tight spaces here, and Rival Choir delivers this substance with admirable efficiency and emotion. Sonically speaking, you might say that the hardcore half of the metalcore equation is emphasized a little bit more here. The music is fast-paced and fluid, with little riffs and themes appearing and then disappearing with regularity, while the upbeat, moderately blastbeat-based rhythm motors on determinedly. Frontman Josiah Lyle's vocals are harsh, raw, and laden with emotion. There's also a noticeable minimum of trudging breakdowns or meandering instrumental interludes. Even when a track has a traditional verse-chorus structure, the transitions go by so quickly it can be hard to notice. This full-speed-ahead approach really keeps the musical momentum going and consequently, there are very few dull moments. By the time the album ends, you might feel a little out of breath.

That being said, the primary focus in the songwriting is on the vocals, not any of the component instruments. Any stretches of strictly instrumental themes are vanishingly short, and it's clear that the instrumentation is written not as the primary focus but rather as a rock-solid backdrop to the vocals and the accompanying lyrics. It's not particularly complex, but it's still varied enough to be interesting and it provides a good backbone. But the strong riffing, occasional solo guitar virtuosity, or big breakdowns fans might expect from a typical metalcore band may end up being a little disappointed.

Nevertheless, there is a good reason why the emphasis is put on the vocals and lyrics. At its heart, this is an album about a Christian's crisis of faith in the face of his own continued sin and apparent hypocrisy, coupled with the difficulty of accepting Christ's forgiveness and trusting in his mercy. Consequently, the angst, anger, and clear emotional turmoil with which Josiah Lyle delivers many of the lyrics should be relatable for many listeners. In the very first track, Lyle expresses his frustration with his own sin nature and his inability to accept God's grace for him, saying "I'm terrified I'll just fall to the wayside and become a blind beggar in this city of grace, unaware that the glory and the riches await just past my doubt on the other side of wasting away." This theme of struggling to accept God's forgiveness while holding onto sin continues in "Empty Words," saying "I'm still dirtier than I thought I'd ever be. I keep hiding from the Cross because deep down I don't want to be free." Other topics that are addressed include frustration with the hypocrisy of the "American dream" and a desire to submit to God's will in everything. This degree of brutal honesty continues throughout the album, and it's delivered with such sincerity that when the story ends on a hopeful note, it doesn't seem pithy or inauthentic.

I Believe, Help My Unbelief is a truly passionate album. It's heavy both musically and lyrically, and it's performed with a degree of raw emotion that is appropriate for its subject matter. It is not a light album by any means, and if I was looking for your typical fun, breakdown-heavy metalcore to headbang along to, it probably wouldn't be my first choice. But I found its message and intensity to be a perfect accompaniment to many of the doubts and struggles that I myself have as a believer, and that makes it a great album in its own right and a worthy debut for the newly-minted Rival Choir.

With their first release under their new moniker, Rival Choir is bringing a newfound intensity to their music. I Believe, Help My Unbelief is a strong record that steps up the game that Mouth of the South played. Double bass, pounding guitar riffs and desperate (if not slightly monotone) screams prevail in tracks like "Poured Out" and "House Fire," but it'd be unfair of me to say that that's the only thing to expect here. Rival Choir has a bit of a softer side, as well. "Sojourn" is an excellent example, mixing the band's hardcore sound with an indie rock flavor, much like contemporaries such as Wolves at the Gate and Everything In Slow Motion. Even little traces of Write This Down can be found here and there. I Believe, Help My Unbelief proves to be an appropriate album title, as the band deals a lot with doubting their faith in Jesus from time to time, but they make it abundantly clear that, in the end, they know who Jesus is and that their faith trumps their doubts. As the first major label Christian hardcore album in 2016, it sets the bar rather high; not just for other bands, but for themselves as well. I'm looking forward to catching these guys on tour in the near future. - Review date: 1/30/16, Scott Fryberger

I Believe, Help My Unbelief is a quality support for a growing Christian melodic hardcore structure. Lyrically, the album is heavy, owing to a strong vocal performance and willingness to delve into personal struggles of recurring insecurity, doubt and guilt, with a transparency that is both admirable and admittedly self-prescriptive. Composing hardcore-based music is certainly where the group excels, with melodic interludes struggling to maintain the standard and slightly limiting the album's impact. On the whole, with continued development and maintained creative energy, Rival Choir may soon became a flagship in a revitalized genre. - 2/9/16, Jeremy Barnes of Jesusfreakhideout.com