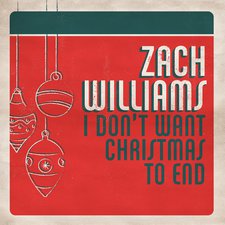 
It can be all too easy to get a bit jaded about a new Christmas album. It seems as if there are only about fifty or so songs (both sacred and secular) that bounce around the music row assembly line when making a Christmas album, and every artist that releases one seems contractually obligated to pick from this list and release a warmed-over version of those tunes. So, when a truly original Christmas album appears on the scene (think Andrew Peterson's Behold The Lamb Of God or Josh Garrels' A Light Came Down), it is a cause for rejoicing.

Zach Williams' I Don't Want Christmas To End does not have the creative flair of those two aforementioned albums, but it does have an authentic "soul music" atmosphere that feels right out of 1968, sort of like a time capsule of a record. And this production choice makes the album a winner right out of the gate.

As the album opens, the familiar and beloved melancholy piano notes of "Christmastime Is Here" (made famous in A Charlie Brown Christmas) slowly roll into a funky drum cadence and a jazzy instrumental backdrop that turns the tune into something more uplifting and soulful than previously heard. Zach Williams' fantastic, gruff baritone sells the song as something almost unexpectedly new and snazzy. Second track "Merry Christmas Baby" continues the Motown party atmosphere with a groovy saxophone line and some wonderful backup singers adding to the mix. And then third track, the traditionally staid and solemn "Mary Did You Know," is likewise given a slinky, funk backdrop with a great horn accompaniment and wailing solo guitar with a moody, atmospheric electric piano. This musical transformation is difficult to describe in words and must be heard to be truly appreciated.

Williams also reimagines old-school classics like "White Christmas" and "Go Tell It On The Mountain" as swampy Creedence Clearwater Revival numbers, complete with wailing harmonicas, pounding bar-room piano and feisty backup singers. Even "Silent Night" works in this proto-southern rock setting, with its Gospel music, slow-burn treatment and rolling electric guitar solo. Other songs, like Chuck Berry's "Run Run Rudolph" and the barn-burner title track complete the party atmosphere and end the album in a wonderful, Ray Charles-like fashion. If there was a drawback here (and this is really reaching for one), a few more original numbers would have made this album a stone cold classic.

But a Christmas party album that would sound just as good on the record player or jukebox is an unexpected delight, and Williams shows both a deep love and a command of this particular kind of soul music. This is one to turn up loud and clear the kitchen floor for dancing and celebrating the best time of the year.