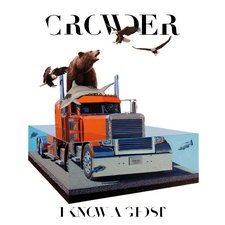 Crowder
I Know A Ghost


David Crowder is easily one of the most notable artists in today's Christian music and worship scene. Crowder has stood out as being innovative and creative, with each album seeming to have its own musical theme. I Know a Ghost is his newest effort and seems to build off of his last album, American Prodigal, more than anything else. I Know a Ghost has some of that same swamp rock sound ("Wildfire"), but the overwhelming musical theme here is hip-hop. Sure, Social Club Misfits join in for a rather odd number, but the hip-hop correlation has more to do with the beats that are underlying in almost every song.

The album actually has a really strong start with the title track, already released "Wildfire," and an album favorite in "Golgotha Hill (King of Love)." While "Golgotha Hill" has a little of that hip-hop feel, there's no doubting the trap-like beat in "Crushing Snakes." "Red Letters," also previously released, follows and sounds like that typical Crowder radio song -- the "My Victory" of I Know a Ghost so to speak. While the song is not a cover of dc Talk's 1998 hit, the concept is the same as they both focus on the words of Christ from the Bible. Mandissa is featured on the gospel inspired "Let it Rain (Is There Anybody)" and Riley Clemmons gets a guest spot a couple of tracks later on the R&B flavored "I'm Leaning On You." "No Rival" takes another strong run at the hip-hop sound before going on a run of a few southern foot-stomping tracks. Right after the most country sounding song in "Night Like This," Crowder and Social Club Misfits deliver the strangest song on the album. Part southern, part hip-hop, and part Latin, "La Luz" almost feels like a country Pitbull song. It's easily my least favorite song personally and is a disappointing feature for SCM. "The Sinner's Cure" brings things back to that trap beat, and features Crowder himself in a pseudo-rap of sorts. "Hundred Miles" is probably the most worshipful song on the album and is the most fitting if you're looking to inject a new Crowder song into your church's worship service. The album finally comes to a close with the song "Ghost." It's a good conclusion to things and is a great bookend to the title track. The opener declares "I know a Ghost" and the closer tells who and what that "Ghost" is exactly.

Crowder has never really played by all of the rules, but has always been accepted and cherished regardless. His creativity is off the charts, but I Know a Ghost is a mixed bag of solid swings and some clear misses. The hip-hop beats begin to become a little too much by the end, and "La Luz" is likely my least favorite David Crowder song ever. However, "Wildfire" is a fantastic swampy jam, "Happy Day" is an absolute blast to hear, and "Hundred Miles" is a great worship song. I personally think this record falls short of American Prodigal, but I do get more enjoyment here than with Neon Steeple. I think the overall verdict on I Know a Ghost is going to rest with the individual listener. It's certainly not an instant classic, but I think a lot will find that this record does grow on them a bit. Perhaps a 12-track version of this album would've scored much higher in the end.

Undoubtedly, David Crowder has heard many different words to describe him as artist, as well as descriptive words trying to label his music. Eccentric. Eclectic. Innovative. Swamp hop. Well, maybe not the last one, but how exactly do you classify an album full of hip-hop beats and banjos? Or EDM infused, country vocal leaning, foot stomping, hand clapping big tent revival styled worship music? That is just a sample of what you will hear with Crowders newest album, I Know A Ghost. Where prior release Neon Steeple took a more banjo and crisp live drum approach, and American Prodigal leaned more on a stomp-clap rock, I Know A Ghost utilizes a steady mix of trap hop drum machines as the main backdrop for the songs. Rest assured banjo fans, this still includes the finger picked instrument, which is featured heavily throughout. (Folktronica lives!) Over the first ten to twelve tracks on the album, Crowder varies the guest vocals and the feel enough to keep it fresh, but over the course of the last four or five songs, the sound begins to grow tiresome. Either somehow varying the sound, or trimming a few songs and offering them as bonus tracks for later release would have helped the listening experience. The songs that did connect for me were the opening tracks I Know A Ghost, Wildfire, Golgotha Hill (King of Love), and Crushing Snakes. These opening four songs do an excellent job of laying the foundation for the rest of the album. Other highlights are the radio ready Red Letters, the guest vocal feature of Riley Clemmons on Im Leaning On You, and the frenetic banjo led Happy Day. Aside from the sameness of the percussion throughout the album, the other thing holding it back is its lack of congregational accessibility. Perhaps this was the goal, but there is little here that could be reproduced by local church musicians. Again, this is not necessarily a bad thing, only worth noting. Despite an over reliance on hip hop, this is a fun album that doesnt take itself too seriously. Crowder and company seem to be enjoying themselves, and there is a palpable joy coursing through the record. While not as congregationally accessible as prior efforts, I Know A Ghost is still a good listen, and a must for Crowder fans. - Review date: 11/6/18, Josh Balogh of Jesusfreakhideout.com

Within the confines of I Know A Ghost is an excellent - perhaps even amazing - album. But unfortunately, in Crowder's latest offering, he undermines his approach with an undue amount of superfluous and uninspired trap beats. Crowder certainly knows how to execute his energetic banjo-twanging style within hip-hop realms, as he did so quite successfully on American Prodigal for a few songs. But with nearly every song in this album's hour-plus runtime featuring rather uninteresting and distracting beats, it makes the album drag and at times just feel noisy, which is a tremendous shame because, in all other ways, I think I really love this album. Imagine how much stronger songs like The Sinners Cure or Crushing Snakes if they either had no hip hop production in the background, or if it was more interesting and better integrated. - Review date: 11/9/18, written by Mark Rice of Jesusfreakhideout.com

To say that an album of songs written (or co-written) by the musical madman known as David Crowder is "all over the place" is to traffic in hyperbole. Crowder (the man and his eponymous bands) has been throwing sounds and genres into the blender for more than twenty years now, and has come out with many great albums and songs. But I Know A Ghost is half of a great album, with the second half filled with genre experiments that feel haphazardly thrown together. The opening five songs of "Ghost" are successful experiments, and are one of the best runs of songs Crowder has recorded. The title track is a suitably spooky, yet epic affair, making a great reference to the Holy Spirit as the thing that "haunts the believer's heart". "Wildfire" is a terrific, swampy dance track that features Crowder's genre-mixing at its best. "Golgotha Hill (King Of Love)" and "Crushing Snakes" are both haunting, Biblical epics while "Red Letters" is Crowder at his radio-friendly best. But after that the inconsistency in quality on the album is hard to ignore. "Let It Rain (Is There Anybody)" is a well-meaning attempt at a light Gospel song with CCM luminary Mandisa, but it's a bit of a jarring change of tone and tempo. "Everyday I'm Blessed" suffers from the same issues, while "I'm Leaning On You" (sung with newcomer Riley Clemmons) sounds like a warmed over Ariana Grande outtake. And the less said about the painful, straight up modern Country Music attempts "Night Like This" and "Happy Day," the better. The back half of Ghost is a bit of a mess, and the attempt at wrapping it up with a continuation of the title track doesn't save the album, though that closing song, "Ghost," is a good track in its own right. "I Know A Ghost" has the DNA of a great album in it, but in practice it sounds like David Crowder on autopilot. - Review date: 11/15/18, written by Alex Caldwell of Jesusfreakhideout.com