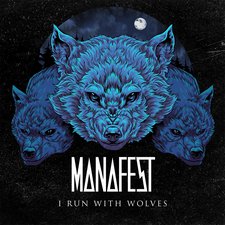 Manafest
I Run With Wolves


Not many artists remain unsigned for as long as Manafest has. Usually after a few albums, the band either falls apart or just slows down with making music. I Run With Wolves is Manafest's sixth (fifth in a row) independent album, and it does not disappoint. The guitar riffs and pounding drums really bring back the feeling of his old style.

The album starts off with the one-minute-long "Dead Man," which serves as an intro to the album. However, shortly after the head-banging guitar riffs come in, the song dies down with some crazy storm-like guitar effects. This leads up to the confidence-boosted pure rock anthem, "I Run With Wolves." This title track is a highlight, and might make the next few songs feel out of place if not here. The next song, "Forever," is one of the weakest on the album. It has a lack of creativity and the song meaning is very cliche.

The next song, "UPS AND DOWNS," is another highlight. The catchy chorus and sung/rapped verses serve as one of the best on the album. "Gravity Falls" features Trevor McNevan, and with his help, it is the best track on the album. This is an instant favorite for the fans of "Fighter" and TFK. "Nemesis" has a perfect spot for Sonny Sandoval (lead singer of P.O.D.). "Break the Habit" only gets better as the song goes and gets even better the more listens. And "Brain Dead" may be the worst song on the album. It also shows some modern influences in the weak lyrics ("They say I'm brain dead/ I can't earn a paycheck/ my life's just a train wreck/ but I don't care/ I'm gonna be a billionaire").

Redlight King features on "Save You," adding much-needed life back into the record. This is the first of the three songs that were released on the previous EP, Blackout. "Doomsday" is an oddball musically, and - it might be just me, but - it seems to have some shaky theology in the lyrics. It is about either his Final Judgment or Judgment Day (whichever you want to interpret it as). But the last line in the chorus is "Bring the ruckus for a change." Now, it may be just me (and it probably is), but this does not seem theologically sound.

"Blackout," the title track from the previously released EP, is the second best of the album. It contains lyrics about a drunkard seeing the truth. The beginning contains some very dark lyrics ("put myself in a dark hell/ how am I doing I'm not well/ just woke up in motel alone/ guess I blacked out"), but toward the third verse, some signs of hope emerge, "truth is burning in my eyes/ feeling like I'm half alive/ I swear this is the last time/ escaping my suicide." Sam Tinnez takes over on most of this song, too. This song is a masterpiece. Sadly, this song could've been a better closer than "Light It Up" (but "Light It Up" is still a decent song).

The biggest disappointment of I Run With Wolves is the fact there are only three new songs on the album (including "Dead Man"). However, it is still a strong album, with a great order, and the pricing is also cheap. I'm also sure most of these songs will sound amazing live. This is a great addition to your playlist.