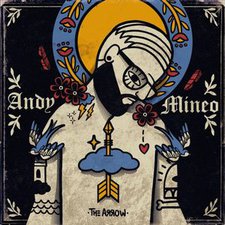 Andy Mineo
I: The Arrow


Reach Records is not today what it was ten years ago. Back then, the label was basically unknown outside of the Christian industry, and the artists' content was almost strictly based around counterculturalism by means of preaching the Gospel. Modern day Reach is still a Christian label, but it has become more open to discussing other topics, such as depression, anxiety, and brokenness, all of which you can find on the latest EP from Andy Mineo, I: The Arrow.

The EP opens and closes with a pair of songs respectively called "I've Been..." and "...Lost." This goes along with the first words spoken in both tracks, "I've been lost for some time." This sentiment makes up one of the central themes of The Arrow; while Mineo has spent albums sharing his faith, preaching the Gospel, and even joking around and having a good time, he's decided to take a different route this time and share some thoughts and anecdotes on his crisis of faith. This deconstruction of faith has been a common theme in a lot of Christian artists' music lately (Lecrae, John Mark McMillan, Levi the Poet). Sometimes this process ends with the person leaving the faith or adopting an unorthodox or even heretical mindset, but these songs clearly show that Mineo still knows Jesus is Lord (as he says in the closing track, "I don't think I lost my mind, I think I made it, I don't think I lost my faith, I misplaced it").

Mineo isn't afraid to get deep and personal in these songs. He takes us through his faith journey, which shows us his time spent unclear on what that faith is and his struggles with anxiety. He also gives us a glimpse into some of the familial issues he's dealt with in "Family Photo." Having an absentee father isn't something I personally relate to, but even so, Mineo makes it easy to empathize with the fatherless life he's led. He talks about how his father didn't show up to his wedding and how he tried to play it off like it didn't matter, but how it eats him up inside; with no holds barred, he says to his dad, "I hate the fact I still love you, I wish that I could turn you off, take the cord to my heart and just unplug you, d*mn man, you're my dad, what I did to you, to make you not love me and mean what I should to you?" It's a brutally honest song, and even then, Mineo shows grace, saying that he isn't asking his dad to be perfect, and he ends the track with the famous "Serenity Prayer," seemingly forgiving his father for it all.

The Arrow's production and beats are very diverse, especially given that there are only six tracks, and two of them complement each other with the same music. The music does a great job of pairing up with the topic or how hard/easy Mineo is rapping at the moment. His casual flow in "I've Been..." fits smoothly on the laid back, r&b-inspired beat. It continues into "Clarity," but not for too long, as the song soon gets turned up quite a bit with Mineo going a little harder in the second verse. "Clarity" features the most unique collaboration of producers: Mineo himself had a hand in the production, as did Reach's own Gawvi, Daniel Steele (a frequent collaborator with Beautiful Eulogy's Courtland Urbano), and Chad Gardner (the lead vocalist of Kings Kaleidoscope). And speaking of going hard, I have to mention the banger "I Ain't Done." The beat on this song, which Mineo produced himself, is the hardest song on this EP and features some dirty, gritty sampling that I can't get enough of.

There is one issue I take with The Arrow, and I feel it's worth mentioning. The song "Clarity," which is one of the EP's highlights musically and vocally, features some soundbites from the author Madeleine L'Engle (A Wrinkle In Time) speaking on the concept of doubt and its supposed importance to the Christian faith. She says lines like "The value of doubt is to keep you open to God's revelations. If you don't doubt, you don't change," and "I want God to wrap me in the everlasting arms and say 'There there, it's alright,' and that cosmic affirmation of 'Yes, I know it's terrible, I know it hurts, but be patient, it's gonna work out. I'm not gonna lose, I'm gonna win. It's alright.' And that's the basic affirmation that I think only true doubters can come to." Statements like this are unfounded in Scripture, and L'Engle seems to have incorrectly applied some sort of deeper meaning to doubt. Doubting God is a natural thing that we do sometimes, because we're fallible human beings, but it's not God's ideal, and you don't have to doubt to be open to God's revelation. You merely have to be humble and willing to listen.

Despite the entirety of the previous paragraph, there's a lot to like about the first in this series of EPs. The Arrow is full of terrific beats, paired with Mineo's signature vocal style and delivery, and his depiction of grappling with faith and coming out still believing in Jesus can serve as an inspiration for Christians who are going through their own crises of faith. If you've already been a fan of Andy Mineo, you've probably already picked up this album by now. But even if his albums have never been in rotation for you in the past, you might end up enjoying this album as much as I do. Personally, I'd consider this his best work yet...at least until II: The Sword comes out (and if you're reading this, it's available now wherever you get your music).