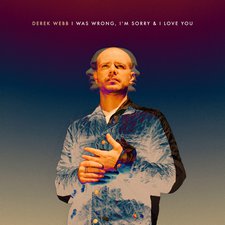 Derek Webb
I Was Wrong, I'm Sorry & I Love You

"It's been twenty years since I rose and cleared my throat." Derek Webb's latest album opens with a retrospective not just of a musical career, but of two decades speaking to the Christian community. When he first left CCM folk band Caedmon's Call to find a home for his less conventional songs, it was the beginning of a complicated relationship with the church. His solo debut She Must And Shall Go Free caused a stir from the beginning with its pointed language, and in the past decade his songs haven't stopped rousing listeners. Whether loved for his experimentation and honesty or criticized for his harsh language and controversial themes, Webb has made a career as a rebel musical prophet and held the attention of the Christian community.

In the years since his much-discussed Stockholm Syndrome, a shift has been happening. There was the electronic instrumental liturgy Feedback and the haunting, confounding concept record Ctrl. Yet, as the music has progressed, so has his introspection, with songs more interested in exploring the dark side of the soul rather than outer controversy. In retrospect, a line from Ctrl stands out: "I love what I can control / So I don't love very much." Now, ten years since Webb "stood outside the church," shaking fellow believers awake in whatever religious, social, or political issue had his attention, his new music delivers three messages: "I was wrong, I'm sorry, and I love you," and the accessible sound and vulnerable songwriting offers an apology and a love letter to the church he has always served. As a confessional and a liturgy, this album presents a refreshingly nuanced and gentle offering in a world too often divided between happy mainstream Christianity and bitter cynicism, and for that, it's a fine record indeed.

While Webb has become best known as an agitator, "I Was Wrong..." points the finger toward himself right from the opening track. His voice rises into a passionate declaration, "I have misled you / I have misread you / I've cared too much and not enough in the same breath." Such self-deprecation is nothing new to his writing, but it's startlingly blunt instead of veiled in symbolism, making this one of his most surprising records yet. Musically, it's a toned down melding of his recognizable electronic and acoustic styles. There are no stark experimental flourishes here -- just honest songwriting.

Though fault-finding and lamenting the Christian ghetto is easy, this album's power rests in deep affection and loyalty. "Eye of the Hurricane" reflects on his journey home, much like part two of the prodigal story he explored in "Wedding Dress." "I am the man from which I am running," he sings with conviction. "So even if wanted to I can't escape." Though this record apologizes, it also embraces the complexity of his artistic role, questioning his critics in "Closer Than You Think." ("What do you think you know about me? / Something that you read or overheard?")

"Heavy" likewise offers a deeper look into a lifetime of longing and sensitivity as he powerfully recounts the tension between wanting and waiting, a longing more universally expressed in grand fashion through "Everything Will Change." Though the spirit of the album stays mostly upbeat, reflective and worshipful moments make their way into the mix via an Anglican chant at the midpoint, and a lovely rendition of the hymn "Thy Will Be Done" at the close.

Unity is the driving theme of this album, as the songs reflect on the tension of loving a flawed and beautiful church. Marriage makes a classically powerful metaphor in the sprightly yet straightforward "The Vow," while "A Place at the Table" expresses how the many facets of God's people can come together as one Bride. It seems this desire for unity has driven Webb all along; it only took ten years of maturity to make the intention clear. What keeps this album personal, yet far from self-indulgence is a tenderness and warmth toward Webb's fellow believers, fans and critics alike, and the result is beautiful and refreshingly sincere.

Derek Webb's music stays consistently interesting because, rather than making one standalone piece after another, each record is a contribution to a greater body of work, an entry in a catalog that reflects his journey as a whole. When he first announced this album, he billed it as the follow-up to She Must and Shall Go Free, the version of those songs he would write today, knowing what he knows now. In that respect, I Was Wrong... is a worthy contribution, multilayered with much to say, yet a musically rewarding listen even on its own. Though the artist's personal journey is far from done, this chapter makes for a grace-filled homecoming.

In a solo career that started ten years ago with the release of She Must and Shall Go Free, perhaps no Christian artist has as openly embraced the provocative as Derek Webb, and it has led even those who don't like his music or believe in message to give him their admiration (along with, of course, admonition). And over the course of those ten years and seven albums, Webb has spoken his mind in brutal honesty regarding both topics that he felt strongly about and that he personally struggled with, and like any person, his thoughts has been refined with time, and so this year he set out to see how his aforementioned solo debut would sound if he made it today. The result, as he states in his opening title track, is that he has just three things he wants to say: I Was Wrong, I'm Sorry, & I Love You.

As a sort of continuation of She MustGo Free, the first and most obvious thing to notice is the sheer absence of a folk sound in I Was Wrong, and even lacking the electronic elements and backing vocals of his more recent records. Instead, Webb has presented his most acoustic, sparsely instrumented, and personal record yet. From the opening track where he declares, "I welcome everyone but give 'em nothing when they arrive, or else build a house with no way to come inside" to his surrender-themed closing hymn cover "Thy Will Be Done," Webb tries less to be provocative and more to be vulnerable than ever before. Musically, Webb's acoustic treatment is nothing less than superb; it's a textbook example of the best in the genre, both soothing and moving without any sacrifice of artistry. The magnum opus "Everything Will Change," the career-summary title track, the poetic "I Measure The Days," and the nostalgic "Your Heart Breaks In All The Right Places" are the biggest highlights, but there really isn't a weak track here.

Without a doubt, I Was Wrong is Webb's musically most accessible album he's put out as he masters the type of sound that almost everyone can appreciate. Those who most appreciate Webb's more confrontational work may be less impressed by the lack of any such material here, but it is a disservice to Webb's openness and exquisite songwriting to dismiss this album as less than thought-provoking. As for those that haven't checked out Derek Webb, or are more leery of his past material, there has never been a better time to get acquainted with him than now. - Mark Rice, 9/1/13