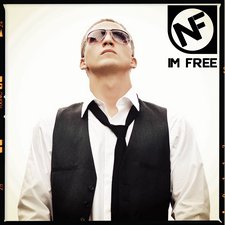 KJ-52 has carried an Eminem comparison throughout his career, but I've always considered him to be the goofy side of Marshall Mathers; the Slim Shady, so to speak. KJ fans, don't get me wrong, I know he has serious songs, but I've never personally been able to take him 100% seriously. If KJ is Slim Shady, then newly signed Xist artist, NF is Eminem; the serious guy who, at times, brings some ferocity to his raps. NF is releasing his five-song I'm Free EP that shows some promise to what the rapper has to offer. It's a blessing to know that God saw him through many struggles, including his mother's overdose and death, to get him to this point.

The EP starts with promise as "Understand Me" kicks things off. The Eminem comparison is obvious, not only because of the color of this skin and overall appearance, but because of his voice. NF tells the story of how he grew up making beats and writing lyrics at the age of 12 and eventually made it to where he is today. It's probably the best song on the EP and features some tight flows. "Alone" is next up and continues on the story of NF's life. While the song's verse has strings that play through the beat and raps, the chorus feels a little out of place. As Sean Simmonds sings the hook with a piano backing, it almost feels as if the song changes for the chorus and then again as it goes back to the verse. Adding more strings and forgetting the piano may have resulted in a better overall sound.

"I've Been There" is another decent track, but suffers from the production and recording. The track features that ferocity I mentioned earlier, but it's nearly cancelled out by the auto-tune usage in the chorus. "Sometimes" takes a hit due to the backing music. The keyboard is overbearing at points and almost sounds like something you would get from a $20 keyboard at your local department store. The serious message is slighted because of the cheesy background sound. When the keyboard is cut back towards the end for a moment, the song shows its true potential. "I'm Free" is another decent track, but also has a dominating backing track.

The other detractor from the EP is its lack of diversity in speed. The first three songs hover around the 125-130 beats per minute mark with no real distinction in speed, while the final two are right around 155-160 bpm. If NF can mix up the sounds a little better, focus more on the beats than the backing music, and provide more diversity in track speed, he could make a big statement in the industry. His raps are solid and his flow is good as well. Hopefully NF can clean up around the edges and deliver a solid full-length debut.