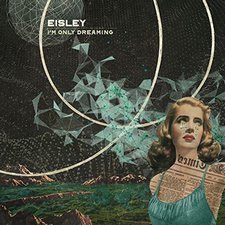 
Over the years, few acts have adapted and evolved as much within their own genre as Eisley. Their latest offering, I'm Only Dreaming, once again sees a notable shift in style. Gone are the snappy vocal harmonies and ethereal ambiance, replaced with more of a laid back indie pop. By no means should this come as too much of a surprise; the recent departures of Stacey and Chauntelle from the familial-based DuPree outfit are indeed felt.

The 11-track album opens with "Always Wrong," a catchy tune, reminiscent of the band's work from the late 2000's. It also serves to kick off an album full of somewhat enigmatic lyrics: "And I know I'd only let you down / and I know you won't stick around / but I'll make sure I'll keep you coming back/ and the taste of wine is oh-so-sweet." The second track, "Defeatist," is both a solid offering and one the album's better pieces, but also continues the lyrical trend: "Your weird mind, your bright eyes / I've wasted so much time / on all the things that don't turn me on / so let's find a way."

Without getting ahead myself, it's worth noting that album does contain some material that a few listeners might find a bit questionable. While many of the lyrics are whimsically sweet, some suggestive content could easily (and probably should) be interpreted. This isn't entirely new territory for Eisley, and being that the majority of the album deals with love and romance, it's somewhat expected. While by no means is any of this "wrong" or "sinful," a healthy awareness of what's lurking under the surface of the lines will be beneficial to some.

The third track, "A Song for the Birds," features guest vocals from Max Bemis, Sherri's husband. It's a lovely little song full of poppy hooks and almost feels tailor-made for radio; a good thing in this instance. "Sparking" is a decent track, but feels too uninspired and relies too heavily on electronic elements. "My Best Friend" features fantastic lyrics ("and I'm carving your name in the tree / where I sit and pray about all of the things I've done / and how I wasn't there with you always / but I wasn't in the right place"), but the melody misses the mark and fails to bring the song to its full potential. Thankfully, "Rabbit Hole" is an enjoyable song with a cute melody and amusing lines: "I fell down the rabbit hole / ring in hand / my mind was full / winged bird, I love you."

"Louder than a Lion" is decidedly the best track on the album, and features guest vocals from Anthony Green. Upon hearing this piece, it becomes undeniably clear that this represents the direction Eisley should be pursuing in light of their current lineup. "You are Mine" feels like a much-needed throwback offering, and "When You Fall" seems more like a track that would be expected on Sherri's solo albums. "Snowfall" is a personal favorite, with its haunting and bold lyrics ("last night I woke beside you / feeling for your hand in the dark / I caught it / holding tight to a locket / my name in Hebrew / breakthrough"), perfectly coordinated with the solemn piano work, and later, echoing drums. The album closes out with "Brightest Fire," a great track which tries to be a little bigger than it truly is. While it does the job well, it doesn't feel entirely complete, and seems to be lacking the energy it aims for.

Interestingly enough, most of the tracks have a similar feel, at least insofar as structure goes. All of the tracks are close to the same length and, unfortunately, the best parts of what Eisley has done differently this time around aren't the most original. While this isn't a terrible revelation, it does keep the album from standing out as much as would be hoped. I'm Only Dreaming is certainly a noteworthy addition to the band's discography, but it fails to resonate as strongly as Combinations or The Valley. Still, it grows in quality with multiple listens and there are a few highlight tracks ("Louder than a Lion," "Snowfall") more than worth checking out.

Over three years have passed since Eisley's last outing, the ethereal and nautical-themed Currents, and fans have been waiting with baited breath for the next release. With the departure of sister vocalists Stacy DuPree King and Chauntelle DuPree D'Agostino, Sherri DuPree Bemis has been left alone at the helm to man the lead vocal duties for Eisley. There have been a few lineup changes as well, including the addition of former Poema member Elle Puckett on guitars. What the next album would sound like was anyone's guess, and despite a few promising singles, Eisley's new album, I'm Only Dreaming, sounds much mellower and less experimental than past efforts. Not a single piano key was plunked for this album--instead, the band opted for a moody electric guitar sound, with the occasional use of electronic elements or acoustic guitars. This release feels more like a Sherri DuPree Bemis solo project, with lyrics mostly centered around Bemis' relationships with her husband and children. While the sincerity in the vocal delivery is commendable, fans of Eisley's past efforts will miss hearing the harmonies and call-and-response singing style that the sisters used. Because of the lack of variety in both sound and vocals, the album tends to drag in some points. Thankfully, there are a few gems that make it worth the listen. One highlight is the candid quasi-love song "You Are Mine," which makes good use of dissonance in the guitar work to complement the honey-and-vinegar lyrics about the reality of marriage. "Rabbit Hole" is the sole acoustic track on this release, featuring a lovely melody and cryptic lyrics. The one track that stands apart from the rest, however, is the edgy, octave-jumping "Louder than a Lion," a tune inspired by DuPree's struggle with insomnia and its surprising benefit of being able to watch over her daughters as they sleep. Guest vocalist Anthony Green appears for the last two choruses of the song, and his contribution is intriguing enough to make one wish he was utilized more effectively. While the sisterly dynamic that made Eisley so thrilling is sorely missed here, I'm Only Dreaming does succeed in creatively conveying personal insight into Bemis' life, and the album does reward repeat listens for those who are willing to take the time. Bemis sings in the opener, "I know I'll only let you down / And I know you won't stick around / But I'll make sure, I'll keep you coming to my door." Indeed, this album won't drive Eisley fans away, but will leave them wanting more. - 2/22/17, Nicole Marie Vacca of Jesusfreakhideout.com

Change is inevitable. Eisley hasn't been a band to make the same record twice, and even the stylistic shift from albums like the quirkier Combinations to the lamenting The Valley and on to the dreamy Currents (possibly my favorite from the band) always caused this blooming fan to have to really live with an album before falling head over heels for it. Recent band member changes have seen two of the three DuPree sisters who shared vocals exiting to hand the lead duties entirely over to Sherri DuPree Bemis. I've always loved Sherri's style, but with her taking front-and-center, I'm Only Dreaming feels more like a solo album than an Eisley entry. From songs about her daughter, Lucy, to love songs about her husband, Max (the lead singer of mainstream band Say Anything), this feels a lot more like a side project. However, repeat listens reveal the Eisley magic lurking beneath the change-filled surface (afterall, The Valley was also a very personal album, albeit featuring a collection of personalities to drive it). There's even more of a raw rock vibe here than fans are accustomed to, and songs like "Louder Than a Lion," which is clearly about Sherri's little one, quickly rises to be a highlight of the album. "Defeatist" is also a highlight, capturing Eisley at its melancholic best, with fellow single "You Are Mine" being a brutally honest look at married life (despite some surprisingly salty language use with "p*ss me off" in the chorus and a use of "d*mn"). Overall, I'm Only Dreaming probably isn't the Eisley record all fans were hoping for, but one has to hand it to Sherri and the remaining members of the band for taking the risk to carry on the band in a different way under the same banner. I'm Only Dreaming is surely a grower, and something to keep us warm this winter, all the while introducing us to a new chapter for the band. - 2/16/17, John DiBiase

Eisley certainly has changed a lot since the days of Room Noises. Even since their last album, Currents, the band has morphed greatly. A significant lineup change has also led to what is probably their biggest change in sound yet: less dreamy and ethereal and more pop rock based. Yet, to this reviewer, I'm Only Dreaming still undeniably sounds like an Eisley album. Sherri DuPree-Bemis' soaring vocals and angelic melodies are as strong as ever as she touches on various topics. The quasi-lullaby "Louder Than A Lion" is a definite highlight, though Anthony Green (of Circa Survive fame) does provide some rather unsettling guest vocals. "Defeatist" is a bright three and a half minutes, which is followed by the super catchy "A Song for the Birds." It's understandable why longtime fans may be underwhelmed with this album, but looking past all the changes certainly helps to uncover the beauty that I'm Only Dreaming has to offer. - 2/26/17, Scott Fryberger of Jesusfreakhideout.com

Eisley's fifth album, I'm Only Dreaming, finds itself carrying quite a heavy burden after the departure of the two sisters, Chauntelle D'Agostino and Stacy King. Despite lacking the harmonies that gave the band their distinct identity, I'm Only Dreaming is a wonderful release that only gets richer with repeated listens. Songs such as the apologetic "My Best Friend" and the melancholy acoustic number "Rabbit Hole" demonstrate the aptitude for emotionally moving songwriting that has been present in each prior release. In its entirety, I'm Only Dreaming is both serene and accessible; a release that's hindered only by the darker "Louder Than A Lion." For longtime fans of the band, the lineup change undoubtedly hurts, but if given some time, I'm Only Dreaming may become the band's most accomplished record to date. - 2/23/17, Lucas Munachen of Jesusfreakhideout.com