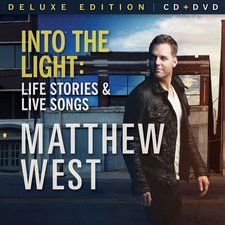 In recent years, there has been no shortage of opinion when it comes to that which is now affectionately known as the deluxe edition. Not to be confused with a rerelease - where a long out-of-circulation album is pulled from the vaults, treated to a full remastering, fleshed out with an new set of liner notes and once again bestowed upon the public at large, many of whom may never have heard the project in its original incarnation - these expanded editions, as they're also called, are an altogether different proposition. In the latter case, a given artist's label takes a usually still-charting record, tacks on a few bonus cuts and/or other teasers and tosses out the resulting product to an audience which consists, in large part, of the very same listeners who bought the album the first time around.

The deluxe edition of Matthew West's Into the Light, which features the original 12-track offering along with a similar-length live DVD, is bound to raise a hackles of those who see expanded editions as nothing more than the work of opportunistic label types intent on charging the consumer twice for the same piece of merchandise, particularly since it comes a mere ten and a half months after the original release's street date. Unlike so many instances where that is least ostensibly the case, the full-fledged rendition of West's most recent outing is most definitely worth investigating. This holds particularly true for those who never got around to buying the standard version (which just happens to be West's strongest showing to date) when it first debuted in September of 2012.

Unlike so many similar present-day efforts, the bonus DVD isn't merely a matter of West and his band trying to replicate the studio versions of his compositions as closely as possible in the concert setting. On the contrary, the songs on the live disc are instead pared back to their most elemental content and then reassembled into entities that preserve the spirit and power of the originals while offering the listener something altogether new. West's band - a set of air-tight, absolutely topnotch musicians - lends faster entries like "Wonderfully Made" and "Into the Light" a heightened grit and energy that render them superior to their already-superb studio counterparts. Likewise, the decision to perform softer numbers like "Hello, My Name Is" and "Restored" in the solo acoustic setting not only enhances their innate intimacy and impact, but also reveals West to be a surprisingly proficient guitarist in his own right - a facet of his talent that tended to get obscured on his studio albums.

Inserted at various spots on each track on the DVD are short interviews with the writers of the letters which directly inspired the lyrics to the material on Into The Light. While such an approach may or may not sound all that gripping on paper, these snippets actually turn out to be one of the project's most compelling and poignant aspects. To be sure, it would be hard to imagine the average listener not drawing at least some measure of inspiration, comfort or conviction (or perhaps all three) from stories of people just like themselves who accomplished the impossible after losing everything to drug addiction, reached out to offer forgiveness to the drunk driver who killed their child, or refused to let a physical challenge like cerebral palsy prevent them from making life-changing contributions to those who play the sport they so dearly love. And West's own introductions to each song, which actually play out like mini Scripture lessons on human hardships and the Divine grace that overcomes them, wind up being merely the icing on the cake.

The bonus features portion of the DVD is a bit puzzling, given that it merely offers the option to play any one of four more songs from the original concert, all of which, like those in the main section, include the accompanying commentary and interviews. Given these tracks' similarity to the remaining eight on the disc, one has to wonder why they weren't simply included alongside those entries rather than being labeled as bonus material. Additionally, the four bonus cuts have to be selected one at a time; there isn't an option for playing all of them at once. It would have been equally nice to have the option of bypassing the interview/commentary feature altogether for those wanting to listen to the concert from start to finish without the spoken-word interludes. Even with these minor inconveniences factored into the equation, though, this extended permutation of West's stellar latest work serves as an all but mandatory purchase for members of the existing fan base. And thanks to the supremely-crafted and consummately-performed music that fills its proverbial grooves, it may well be the tonic that finally brings the naysayers and fence-sitters into the ranks of the converted.