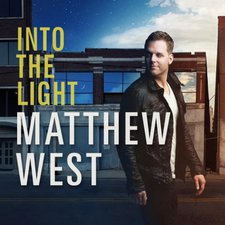 Matthew West
Into The Light

So, what does an artist do after he's netted fifteen Top 20 singles (including five chart toppers), penned compositions for everyone from Mandisa to Rascal Flatts, pulled in a veritable truckload of Billboard, Grammy and Dove awards and nominations, overcome a potentially career-ending vocal ailment and had his name tossed into the mix for, of all things, a Daytime Emmy? If that artist happens to be named Matthew West - who, it should be noted, achieved all of this and more in just under a decade's time - he simply keeps doing whatever it was that brought him to this most rare of points in the first place.

One of West's most prominent strengths has always been his ability to pull the listener directly into the heart of his songs. Thankfully for all concerned, this particular talent remains in full flower on his seventh studio effort. "Moved by Mercy" offers a gripping twin account of both abuse and regret ("I'm chasing a younger me/ Try to wrap my arms around her/ Shield her from the hell that found her/ But I'm always just a little too late"). "Restored" and "The Power of a Prayer" take long, likewise unflinching looks at marital infidelity and discord. "Wonderfully Made," like 2008's "You Are Everything" before it, offers unshakeable words of encouragement for those struggling with low self-worth. And "Hello, My Name Is" ("My name is regret/ Every single day of your life/ I'm the whisper inside/ That won't let you forget") is unsettling in the most positive and exhortative sense of the word.

As noteworthy Light's lyrical half is, perhaps the most remarkable thing about the new record is that hardly any two of its cuts sound even moderately alike. The invigorating title track opens the proceedings with a host of buoyant "Come on! Come on!" chants that lend the irresistibly lilting tune a shimmering power pop sensibility. "Forgiveness," on the other hand, adorns its beautiful orchestrally-based textures with intermittent, and perfectly-suited, semi-ambient flourishes. Elsewhere, West delves into energetic, arena-ready rock ("We Are the Broken"), gently-loping country-pop ("Waitin' on a Miracle"), and a bevy of other styles before ending with the engrossingly stark piano-based ballad "The Power of a Prayer."

Of course the danger with such a varied assortment of songs is that each of them tend to sound good taken by themselves, but placed side by side, they tend to run together into an incohesive, unfocused mess. Such is hardly the case here, though. In fact, for all of its stylistic diversity, the album, as a whole, is arguably greater than the sum of its already impressive parts. The record's varied palette isn't such a radical departure that it's likely to put off West's existing admirers. It may, however, shake things up just enough to entice fence sitters who have yet to be moved by what they've heard up to this point. Potential new converts aside, Into the Light is, at its heart, a textbook example of thoughtful, well-performed pop and arguably stands as West's strongest - and, ironically, most consistent - release to date.