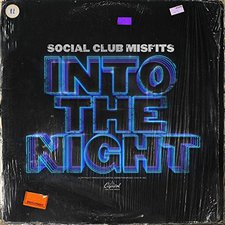 Social Club Misfits
Into the Night


Into the Night is the latest release from the always-candid rap duo, Social Club Misfits. Through a mix of wit, witnessing and pop culture truth-bombs, rappers Fern and Marty have crafted a solid hip-hop album that even casual fans of the genre can appreciate.

The first track, "Nightmare," opens with a killer line that throws listeners into Social Club's bold style: "Devil's worst nightmare, us." The two rappers then fire back and forth over a slammin' backbeat that would get even the most reserved of us to tap on our desks. To a casual listener, lines like "you know that we spit the best work" might be mistaken as typical rapper swagger, though Marty and Fern's frequent references to God's grace separate them from the secular norm. As with much of Top 40 hip-hop, most tracks feature pop artists and other rappers, notably American Idol alums Danny Gokey and Jordin Sparks in the lively, Latin-flavored "Tuyo." Not only is this song fun, with excellent vocals and a catchy hook, it also shows Fern and Marty's underlying faith in God and their love for His people. Marty raps, "This is for my peopleen Puerto Rico...the hurricane could not defeat you / I promise that He'll never leave you / He'll never lead you in the wrong way / Every day God we need you." It's a timely message after Hurricane Maria, and a reminder to all of us that, no matter what happens, God's got us.

Throughout the album, Fern and Marty rap honestly and aren't afraid to call out those who don't. In "Happy Accident," Marty addresses artists that only care about fame, saying, "It's not about making it up to the top / It's about making a difference." In "Clear," they demonstrate what "making a difference" means as Fern references his cocaine addiction and how Jesus rescued him from it. He raps, "I was the kid on the block / Who got intrigued by the blocks... It is the goodness of God that would lead a man to repentance / I put my life in these words / And I pray you don't catch you a sentence." On first listen, "Clear" might be one of those songs you skip in favor of livelier, melody-based ones like "Solo." But, on both tracks, these guys wear their hearts on their sleeves as they proclaim, in Spanish and English, Christ's grace for the lost.

In short, Into the Night is more than an entertaining hip-hop album with great rhymes and infectious choruses; it's also, in Marty's words, "about making a difference." Personally, I am not a die-hard hip-hop fan and, though I admit there's a lot of talent in the industry, I have grown cold toward much of secular rap's demeaning and immoral lyrics. So, when hip-hop, which so many kids listen to, has important and truly hopeful things to say, we should thank God for artists like these who spread the truth.

Marty and FERN are back at it with their second full-length release with Capitol, despite just releasing an album about a year ago. I absolutely love that they are staying so busy - touring at what seems like a non-stop pace and releasing new tunes so often, because it's wonderful. So what does "Into The Night" offer fans of the misfit gang? The intro track, "Nightmare," is simply banging and reminds me of "Steinbrenner" with its quick flow and hot production, while "Dive" comes along quickly as a quirky track featuring Beam. It's a staple SCM song, and along with your typical fun tracks, like "Happy Accident" and "Clear," I can see fans enjoying these selections at their next house party. Other standout songs are the title track, where FERN spits fire while laid over hot beats, and "Lucky" which is a cool track giving some insight into the duo's journey. In the end, my favorite song would have to be the collaboration with the soulful Tauren Wells on "War Cry." It's smooth and offers a more reflective and purposeful track telling us to all stand up together. Lyrical content, like "a love that can conquer hatred, but it's up to us, a new generation to show His love, from the ends of the earth til the day He comes" points listeners to the Savior. All in all, this is a really solid release from the misfit gang. The lyrical content is funky and fresh and delivers a very positive focus while combining serious thoughts and lighter fare at the same time. This is not their best effort to date, but most fans will be happy to add this to their collection. - Review date: 2/10/18, written by Kevin Hoskins