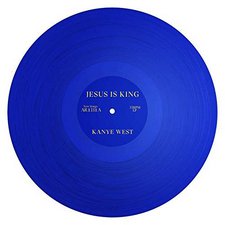 
The year is 2019, and Kanye West, yes, that Kanye, has released a gospel-centric hip-hop album called JESUS IS KING. What a beautiful, and most surprising twist in this thing called life. JESUS IS KING is an album that perfectly describes the state of Kanye's faith journey...in process. Truth be told, it is one we should find familiar because it is the story of us all. As I listen, I hear attempts at humility woven through a life of selfishness; I hear heavenly longing sought for in earthly pursuits, and if I'm honest, I see myself in the mirror.

Overall, the album feels half-baked, like an idea not fully-formed, however, this also seems fraught with purpose, and comes with its benefits. At twenty-seven minutes across eleven tracks, it is a refreshing snapshot of a man newly given over to and living for Christ. Some things are best said with brevity, and given time to sink in with repeat listens. I appreciate that Kanye has something he seemingly cannot wait to say but doesn't feel the need to say it ad nauseam. This is a welcome change for a man not known to show restraint. What we have here comes across as a new convert eager to share his testimony, as quickly as possible.

The album begins with a frenetic choir wailing, "sing until the power of the Lord comes down," on a brief opener devoid of any sign of West himself. There seems to be a double-time pace utilized to cue the listener to what they are in for throughout the tracklist. Songs are coming fast and lean. Kanye makes his entrance on "Selah," with an organ setting up his rap verse, and the gospel choir reaching for the heavens as they repetitively sing "Hallelujah" in rousing fashion. "Follow God" harkens most closely to previous Kanye work, as he utilizes a sample from the Whole Truth song, "Can You Lose By Following God," to support the biggest thumper on the album. Within the song, he examines a disagreement with his father over religion stating, "I was screaming at my dad/and he told me "it ain't Christlike," displaying some exasperation and ultimately confessing, "Father I stretch my hands to you." How relatable, as the ones who know us best, often push our buttons hardest leaving us with a choice of how to react. "Closed On Sunday" has typical West goofiness using Chick-fil-a to address the topic of lust, addiction, and raising his kids up in the faith rapping, "closed on Sunday/You my Chick-Fil-A/You're my number one/with the lemonade/raise our sons, train them in the faith/through temptations/make sure they're wide awake/Follow Jesus, listen and obey."

Another highlight is the slow Andrae Crouch-inspired jam, "God Is." With hoarse vocals, Kanye earnestly proclaims his new mission, "I know I won't forget all He's done/He's the strength in this race that I run/Every time I look up, I see God's faithfulness/And it shows just how much He is miraculous/I can't keep it to myself, I can't sit here and be still/Everybody, I will tell 'til the whole world is healed." Also, fair warning to those concerned with profanity, it is worth mentioning that the one and only cuss word is in this song, where he passionately says, "this ain't about a d*mn religion/Jesus brought a revolution/All the captives are forgiven." In "Hands On," West delivers a gentle challenge to Christians who would judge him rather than pray for him. The following should give us all room for pause, "told people God was my mission/What have you been hearin' from the Christians?/They'll be the first one to judge me/make it feel like nobody love me." (Ouch. Surely we can do better.) Lastly, "Use This Gospel" calls back to 808 & Heartbreak era vocoder sounds as he sings in the chorus, "use this gospel for protection/It's a hard road to heaven/we call on your blessings/In the father, we put our faith." Then, surprisingly, the song comes to a close with an unexpected Kenny G saxophone solo as Kanye chants "work" through to the end.

Will there be staying power? A deeper look inside Kanye's conversion? A more fleshed-out version of this album? Only time will tell, but I for one am rooting for him and praying for continued growth and perseverance. I hope he keeps the long view, as critics are split in their thoughts on this polarizing work. There isn't anything innovative or particularly profound here, but there is a man who seems to be on fire for God, and that's deserving of celebration. Fans of his previous work won't find much to crank, but those uninitiated may just find a few new favorite songs for the playlist with "Selah" and "Follow God" the most likely to fit that bill. Though some may claim the album too short, perhaps better released as a 5-6 song EP, I for one am glad he released it in its current state. It's certainly worth a listen at the very least, and we all should all be praying for our brother in Christ.