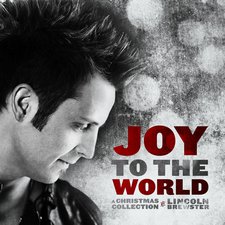 Lincoln Brewster
Joy To The World: A Christmas Collection

While many an aspiring Christian worship artist has honed his chops playing in the praise band or singing in the local church choir, Lincoln Brewster's introduction to the wonderful world of inspirational pop came by a far less likely route. Long before young Lincoln even had his driver's permit, his mom, Cheryl, was toting him around to the bars in his hometown of Homer, Alaska, to hone his guitar chops with the local musicians who played there. By age 12, Brewster had formed his very own band, Lincoln and the Missing Links, with his mother, herself, handling bass and vocal duties. While most kids that age spend the better part of their time imitating their idols, Brewster actually got a chance to play with one of his. Indeed, just over a decade after forming the Missing Links, Brewster received a telephone call from none other than Steve Perry, former lead singer for Journey, asking him to work on Perry's 1994 For the Love of Strange Medicine album and join him for the ensuing tour - all of which Brewster happily signed on to do.

Of course, the majority of Brewster's fans are probably blissfully unaware of his history with Perry and have instead come to know the talented guitarist native via his soaring, high-energy versions of modern worship standards like "Shout to the Lord" and "Lord, I Life Your Name on High." For those in this camp, there are, thankfully, more than a few welcome points of reference on his inaugural holiday-based offering. Indeed, Brewster's characteristically melodic, guitar-driven pop/rock is in full flower on bracing renditions of venerable holiday favorites like "Do You Hear What I Hear?" and "Hark! The Herald Angels Sing." The slightly reworked "Shout for Joy," which initially appeared on Brewster's 2010 Real Life album, is sewn from the same piece of cloth as those two tracks, thanks to its high melodic quotient and likewise lilting rhythms.

The nimble-fingered fretmeister truly hits his stride, though, when he ventures out from such purely pop/rock territory. The triumphant "Miraculum" instrumental, with its perfectly-suited crisp, clean electric guitar tone and swirling orchestral backing, gives some hint of what a Gary Hoey-led Trans-Siberian Orchestra might sound like. The tight, funk-filled "Little Drummer Boy," which features a rapped interlude from KJ-52, is a similarly winning proposition. Brewster slows the beats-per-minute count and lays back in the groove on the simmering, bluesy rendition of "O Come, O Come, Emmanuel." And the sublimely beautiful slo-core-meets-blues aesthetic of "Silent Night" features the kind of hushed intimacy one might find in a tiny one-room apartment as a young mother sings her newborn baby to sleep by the light of the tree on Christmas Eve.

There are one or two slip-ups along the way, however. The mushy-sounding title song, with its copious compression and kitchen sink construction where solos and other effects are thrown into the mix seemingly at random, skirts perilously close to white noise territory. The cover of Chris Tomlin's "Our God" seems both musically and thematically out of place, given its plain vanilla, made-for-radio instrumentation and non-Christmas-based lyrics. And "O Holy Night (Another Hallelujah)," which continues in a straight line from classic/contemporary hybrids like "The Wonderful Cross" and "Amazing Grace (My Chains Are Gone)," combines a fairly straightforward (and not terribly engaging) reading of "O Holy Night" with a portion of Leonard Cohen's now-famous single, "Hallelujah," the latter of which has been done more convincingly by any number of other artists since its 1984 debut.

For all of its shortcomings, Joy to the World is still loaded with more wheat than chaff. To be sure, in an era where so many holiday projects seem like little more than hastily-tossed-out afterthoughts, Brewster's latest outing is reassuringly solid and very nearly on par with his most recent records - which is saying a good bit, given the quality of those releases. It isn't Brewster's strongest offering by a long shot, nor is it likely to displace the average listener's copies of Nat King Cole's The Magic of Christmas or Amy Grant's first Christmas album. But for those who enjoy a little pep and zing as they put up the tree, enjoy a sip of hot apple cider or tear into that mysteriously-shaped package from Aunt Edna, a healthy dose of Joy may be just what the doctor ordered.