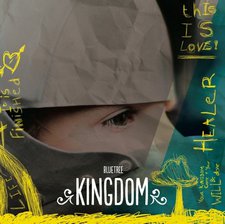 The boys from Belfast first gained notoriety with their 2009 release, God of This City, the title track garnering much of the attention. The awareness Bluetree enjoyed was only furthered by Chris Tomlin's rendition of the song. Taking a step back from the larger stage- Aaron Boyd and friends sought to reconnect with what God was doing in their local congregations. The result is their new collection - entitled Kingdom.

Musically, every convention of modern worship music is present. Guitar licks with slight distortion and a metric ton of delay? Check. Overlayed with synth? Got it. Driving drums that build into every chorus? You betcha. And the list could go on. The musicianship Bluetree exhibits is refined and obviously suited to the work. Easily distinguishable vocals ring through every track, with Delirious? front man Martin Smith making a notable guest appearance on "Shine." The production feels very sanitary, in typical Paul Mills fashion (Third Day, Newsboys, Lincoln Brewster), with arrangements that never overpower their primary elements and any rough edges pruned into oblivion. The parts contributed serve the songs they inhabit, and overall the presentation is clean and balanced.

Lyrically, Boyd purposely focuses upon the victory of Christ over sin and death. "Under My Feet" encourages trampling Satan into the earth while singing of God's power and permanent victory. "Glorious Victorious" encourages praising God for our freedom while singing of His power and permanent victory. "It is Finished" and "Exalt Him" encourage us to praise God because we are redeemed and brought to new life in Christ while singing of (wait for it) God's power and permanent victory. There's a trend here somewhere, I can feel it... Having a theme or aspect of God to ground your work in isn't a bad thing, but when the first track contains the tried and true rhyming conventions of modern worship, "Forever God you reign / Eternally the same / The name above all names," the consistency's going to get noticed--and not in a good way.

To be fair, and put previous snarkiness aside, there's only so much one can do when crafting songs for congregational consumption; keeping lyrical simplicity is often necessary. Utilizing traditional phrases from Scripture like "Word made flesh" or "Name above all names" is a great idea for inspiration and exposition. Even phrases from other worship songs that have worked themselves into the genre's official canon, like "Heaven came down" or "Amazing love" or "You never let go" are fine. But when you have literally all of those items (and more familiar expressions) on one album, again, it's noticeable for the wrong reasons. I'm even okay with repeated choruses that have the same words over and over if it's written and recorded with passion and obvious pursuit of God.

The problem with albums like Kingdom is that so much of the raw, God-seeking HEART of the songs is filtered away somewhere in the creation of the work. Boyd collaborated with Ryan Griffith and potentially others from his church during the songwriting process. Maybe there was too much input? And if it wasn't the writing, maybe it's the recordings themselves that sanitized the gusto away? If Bluetree had done this collection live, with the worshippers these songs were written for in their home churches, I imagine the result would be far more dynamic and engaging. But delivered as it is, I fear Kingdom will be passed over as 'more of the same.'

Ultimately, Kingdom is declarative, accessible worship music. It's also hackneyed - never straying too far from the established paradigms of the genre. If Boyd and company were trying to put a soundtrack to the season God has their local churches in - then however we in the broader Church perceive what they've shared doesn't matter. These are their "songs of the moment" with God. And apparently for Bluetree, that moment reflects the awe of the Gospel in its simplicity and absolute finality, which isn't a bad thing to remember, even if you've heard it before.

Bluetree, an Irish worship band with a great back story (they were discovered by none other than Chris Tomlin while he was on tour), unfortunately treads artistic water on their new major label release, Kingdom. The songs are all pleasant enough, with a few, like the energetic opener "Glorious Victorious;" the slow building, six minute "Shine" and the heartfelt, prayerful "You Are My Rock" breaking through all the sameness. But too many songs and songwriting tricks on this album feel safe and familiar to the current worship music status quo.

Being an international band, it would seem that Bluetree could offer a different and refreshing perspective on the modern worship song, and perhaps they will someday. But Kingdom, while heartfelt and well produced, is not that album. - Review date: 5/7/12, written by Tincan Caldwell of Jesusfreakhideout.com