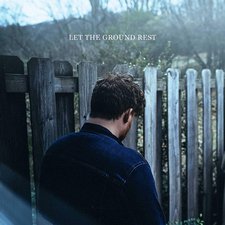 
Acoustic/folk artist Chris Renzema has been one of the best-kept secrets of the independent music scene in the last few years. Thankfully, that looks like it's about to change, and not a moment too soon. After the streaming success of his independently released album, Ill Be The Branches, in 2018, he was quickly snapped up by Centricity Music in December of 2018. Though roughly a year late to catch on to his music, this reviewer quickly fell for his down-to-earth acoustic offerings. This was first driven by the devastatingly beautiful song, How To Be Yours, with the remainder of the album later becoming a favorite after seeing him open for The Gray Havens in concert.

Now with the backing of a label, Chris drops this breath-of-fresh-air to Christian music listeners in the form of his newest album, Let The Ground Rest. In a word, this album is prescient. He couldnt have known it at the time, but his personal struggle with allowing the ground to rest during the creation of these songs would be a very apropos message for what the world has experienced so far in 2020. Whatever type of work or creative endeavor, the practice of rest is biblical, though the principle is largely ignored in our modern times. In Renzemas case, allowing time for rest fueled his creativity, and eliminated the pressure to produce. Ultimately, this brought about these finely-crafted songs and a great reminder for listeners that God's created order in Genesis chapters one and two is for man to work from rest, not so that he can rest.

Right out of the gate, Renzema leads off with a highlight song and opening statement in the piano-based and lead single, Springtime. Its a laidback choice to begin the album but its the right call, as it sets the table for a cohesively themed project with strong lyrics throughout. A few lyrical examples scattered among the song are the latter parts of both verses, with these from verse one standing out in particular, You're the king of heaven/The praise is yours/The longer the quiet/The louder the chorus. Other gold nuggets can be found in verse two such as, You're the sun that's shining/You restore my soul/The deeper you call us/Oh, the deeper we'll go. Then the joy-filled chorus brings it all home, declaring, We will sing a new song/Cause death is dead and gone with the winter, and, We're coming back to life/Reaching towards the light/Your love is like springtime.

Other highlight songs among the many options are the melodious "Not Finished," the urgent "17," up-tempo "Signal Fires," the finger-picked "Steal Back Your Joy," and the title track. Some of this reviewer's favorite lyrics are contained within the latter as Chris sings the reassuring chorus, "Oh/Just let the ground rest/If its not right now/Its for the best/Youre gonna grow/I know this/But for right now/Just let the ground rest. Surprisingly, Renzema stated in an interview that this was the last song he wrote for the album, but regardless, it ties up the rest of the songs preceding it masterfully.

If there is one thing to nitpick, its not about whats present, its about whats not. One more up-tempo tune would have served the tracklist well as the album leans toward the slower side. Although, even in saying that, this seems intentional to fit the theme of "rest," which saturates the album. Also, less a complaint but worth noting, it's a head-scratcher that the label didn't capitalize on leveraging a re-release of "How To Be Yours. It would have fit perfectly within this grouping of songs and graced newer listeners with a fantastic song. Nonetheless, the record as a whole is strong from top to bottom without the need for skipping a single song from musical sameness or lyrical cliché. Featuring vertical lyrics fully grounded in Scripture, and acoustic musicality deftly supplemented with flourishes of other instruments, this is a sure-fire top ten album of the year contender. Many of these songs are psalm-like and, paired with Chris' earnest vocals, it makes for a perfectly worshipful experience. Though it may take multiple listens to allow the album to worm its way into your heart, its certainly worth the time, and after many spins from this reviewer, it's safe to say this record seems to be built to last.