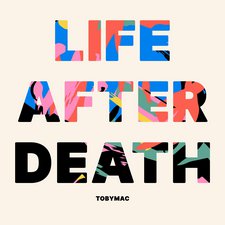 
There is likely not a more beloved citizen of the Christian music world than Mr. Kevin Michael (TobyMac) McKeehan. From the early days (and big hair and hats) of dcTalk, to their ascent to superstar status in the mid-nineties, to TobyMac's twenty-plus year run as a solo artist, he has worked hard and delivered the musical goods year after year.

But there is also likely no one in Christian music who has had a more difficult past few years either.

The story of TobyMac’s son Truett’s death is well-known at this point, but TobyMac’s new album, the appropriately named Life After Death, is his first longform outing since that tragic event a few years ago, and it’s an equally well-crafted and heartbreaking take on the aftermath of events like this, particularly for those left behind.

The first thing that jumps out about Life After Death is the sheer amount of collaborations on one album. TobyMac has always been a gleeful music community member, guesting on other artists' albums and having all sorts of artists show up on his. But his latest album takes the guest star idea to the next level. Perhaps in making such a personal and heavy album, a community of friends is what was needed. And in having so many other artists around, the album almost takes on the feeling of a modern musical, with all kinds of voices showing up and a thematic touchstone of both loss and rejoicing in place.

The first four tracks on Life After Death tip towards an old school, 70’s era soul music review, with the funky and epic “Help Is On The Way (Maybe Midnight)” leading on. TobvMac, fused with a fantastic coterie of baritone backup singers, shows that his ability to craft a hook-filled radio song has never been brighter. The following, soulful “The Goodness (Featuring Blessings Offor)” feels like the kind of Sunday morning Gospel music tune that would bring the congregation to its feet. Soul singer Blessings Offor adds his magnetic presence to this tune, and two songs in, TobyMac has already showed his uncanny ability to mix sounds and still sound like himself.

In a surprise bit of “guest casting,” 90’s rocker Sheryl Crow shows up for a remix of previously released “Promised Land”, and her well-known voice adds depth to this already-great tune that finds TobyMac at his most raw. This soulful and epic song finds the fiery performer showcasing a new side of himself after all these years, a sincere vulnerability. Set against a melodic bass guitar line (reminiscent of U2's classic "40"), TobyMac builds a case that the last few years have really taken their toll on him (for many obvious reasons), but his hope is not in having an easy life, or a "promised land" down here: "Out here on this desert road / It's hot as fire but I've grown cold / Circlin' like a plane that never lands / And even though the questions change / The answers always stay the same / Maybe someday I will understand / So I'm wonderin' / Got me wonderin' / Where's my promised land?" Then, towards the end of the song, TobyMac's perspective on a "promised land" changes from a physical place, or state of mind, to the comfort that the Lord promises to bring in the midst of the storm: "I won't give up on this race / Broken but I still have faith / That this old life is part of a plan / And I can feel it in my soul / One day, I'll stand before the throne / With nothin' left but hope and these two hands / Through all these seasons / I'm still believin' / You're my promised land / In all my grievin' / I'm still believin' / You're my promised land." The haunting “21 Years” continues this melancholy side and features a number of heartbreaking lyrics that reference inside jokes between TobyMac and his departed son alongside a mournful keyboard sound. The female artists Marlee (Toby's daughter) and Sarah Reeves add their prominent vocals to a few more songs that reference the sad passing of Mac’s son, and Life After Death suddenly moves from a great showcasing of talented artists and good songs to a more holistic work about grieving that perhaps serves as TobyMac’s greatest album. With a lyrical cohesion and an almost theatrical community feel throughout, Life After Death is a tough album (if you understand the sad context of it) that nevertheless gives hope.

TobyMac says it best in “Faithfully,” one of his rare solo songs on this album, and one that bleeds with purpose and sincerity: “You made a way for me / I may never be the same man / But I'm a man who still believes / When I cried out to You, Jesus / You were there faithfully.”

Life After Death is well worth your time, and shows that in Christ, believers “do not weep as those who have no hope.” Tragedy is not the end of the story.

Album number eight finds TobyMac in an understandably contemplative place. With the passing of his oldest son Truett in late 2019, and the last few tumultuous years the world has been dealing with, it's no surprise. It's also no shock that this fifteen-track album has the most guest vocalists that he's ever featured on an LP - or even that several songs directly deal with his grief process like, "21 Years" and "Everything About You." It seems as though the veteran is looking to his community to help him through a dark season. He sounds weary yet hopeful on tracks like "I'm Sorry (A Lament)," "Faithfully," and the gentle closer, "Rest." The front half of the album, specifically tracks one through seven, set the typical head-bobbin' tone with the previously released single "Help is on the Way (Maybe Midnight)," "The Goodness," "Show Up Choose Love," and the boldly defiant "Life on It" making the biggest impact. Even his DC Talk mates Michael and Kevin join the fun on Life After Death for the reverb-heavy tune "Space," which seems to address the strained relationships that sent the trio on intermission. It's a welcome reunion that I'm sure many fans hope leads to more collaborations. Aside from the DC Talk song, perhaps the two biggest surprises come in the form of not only Sheryl Crow's (Yes, that Sheryl Crow) appearance on "Promise Land," but also Zach Williams joining for "Cornerstone." It's not just the interesting pairings, it's the near country leanings of each song that perked up this listener's ears. Oh, there's plenty of hip-hop in the mix, but if memory serves, this is the first time that country music stylings have made it into the signature TobyMac soul, pop, funk, rock gumbo. Call me crazy, but it works. Ultimately, Toby's clear production, strong pop hooks, and eclectic sounds are here to once again, and after all these years, prove he's still got it. Life After Death doesn't break any new ground, and there are some musical rehashes here in addition to a bloated track list, but overall, the album does what it does well. It provides danceable car tunes, with heaps of encouragement brimming with a palpable joy despite several years of hardship and pain. This one is sure to please longtime fans, and makes for a must-listen in 2022. - Review date: 8/16/22, Josh Balogh of Jesusfreakhideout.com

Life After Death is an emotionally gripping journey that is by far the most cohesive TobyMac album to date. Highlights include "21 Years" and "Everything About You" which turn on the waterworks, and "The Goodness" and "Deeper" which are some of the most infectiously catchy TobyMac songs in recent memory. The track list could have benefitted from some trimming at the end, but as it stands, Life After Death is a landmark album in a fantastic discography. - 8/17/22 Christopher Smith